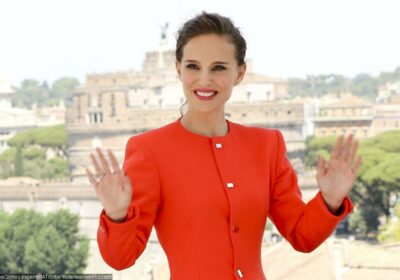 The miniseries pauses production after several individuals threatened the set in Baltimore with violence, attempting to extort a large sum of money from the crew.

AceShowbiz -Fans may not be seeing Natalie Portman starring on her new Apple TV+ series anytime soon. The production of “Lady in the Lake” has been delayed after facing violent threats by locals in Baltimore.

Production on “Lady in the Lake” began in Baltimore several months ago. The production team announced on Sunday, August 28 that they decided to halt the filming after they were threatened with violence. According to Maryland authorities, several “drug dealers” asked for a large sum of money from the series crew.

The drug dealers reportedly warned they would shoot someone if the cast and crew of “Lady in the Lake” didn’t clear out of the downtown area. The group also allegedly demanded $50,000 from producers, who declined to pay out. “The leaders of the production decided to err on the side of caution and reschedule the shoot after they found another location,” a Baltimore Police Department spokesperson said.

“Friday afternoon, on the Baltimore set of our production ‘Lady in the Lake’, prior to the arrival of the cast and crew, per their call time, a driver on our production crew was confronted by two men, one of whom brandished a gun directed at our driver, and then they fled the location. We are working with the Baltimore Police Department as the investigation is ongoing,” the studio behind the series, Endeavor Content, said in a statement. “The safety and security of our crew, cast and all who work across our productions is our highest priority, and we are thankful no one was injured. Production will resume with increased security measures going forward.”

The miniseries, based on Laura Lippman’s 2019 novel of the same name, takes place in the 1960s and follows Maddie Schwartz, an aspiring investigative journalist, as she seeks to unravel the mysterious death of a young mother and progressive activist, Cleo Sherwood. The streaming service announced the project back in March 2021, with Natalie and Lupita Nyong’o originally signing on to play Maddie and Cleo, respectively.

In surprising news, it was revealed back in May that Lupita would be exiting the show for unknown reasons, with the role of Cleo eventually being offered to Moses Ingram. The Emmy-nominated actress is best known for portraying Jolene on “The Queen’s Gambit“, though she has also appeared on Disney+’s “Obi-Wan Kenobi” and the 2021 adaptation of “The Tragedy of Macbeth“.

In addition to Natalie and Moses, the rest of the series’ cast includes Y’Lan Noel, Mikey Madison, Brett Gelman, Noah Jupe, Mike Epps and Byron Bowers. All episodes of “Lady in the Lake” are set to be directed by creator Alma Har’el, who previously gained recognition with the release of her critically acclaimed feature film debut, “Honey Boy“.