Naomi on CW: Flooded with praise from viewers after series premiere ’Impressive debut’ 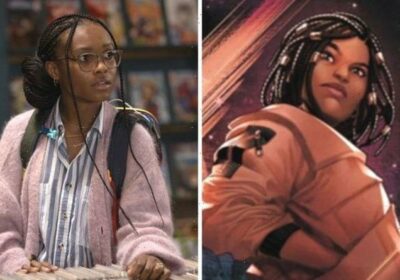 The CW’s latest series Naomi took social media by swarm after it premiered on the network on Tuesday. Naomi is the onscreen adaptation of the DC comic book series of the same name which was released in 2019 and judging by social media, viewers were happy to see it hit the screens.

With her skateboarding abilities, all she had to do was show off a few tricks to gain applause from admiring students.

However, she came in contact with newfound powers after she left school to chase a Superman stunt on the main street of her Pacific Northwestern town.

Although she was initially feeling fine, the moment the teenager arrived near the town square she felt dizzy and eventually fainted, after the sound of an intense buzz.

When she eventually came to, the others involved in the Superman stunt had cleared, which led her to ask other witnesses what they saw so she could post content on the Superman blog – however, Naomi soon fainted again at a nature-versus-nurture debate.

Things got further complicated with Naomi when she met up with Zumbado (Cranston Johnson) who was one of the other 29 people to be given this power.

The two bumped into each other at the Red River Forest and unexpectedly her powers gained a mind of its own and began to levitate the leaves, before knocking her out.

Viewers were transfixed to the screens and watched in amazement as they tweeted praise for the series.

Archer_rayshawn wrote: “That was actually a really great premiere, I don’t know much about Naomi but I am really interested in seeing her story.”

ThomasComicTalk shared: “I actually really liked this premiere. Sets up a lot of the moving pieces and I’m interested to see where the story goes.

“Also huge props to Kaci Walfall for being super charming and engaging right off the bat. Excited for what the future brings for this series,” they added.

TheAmamzingRyGuy tweeted: “That was an impressive debut! Well done! Looking forward to next week’s episode.”

While an impressed Supersheperd remarked: “Naomi is already better than half the DC shows on the CW after one episode.”

As well as Zumbado, the series also introduced a number of Naomi’s friends including her best friend Annabelle (Mary-Charles Jones) who stuck by her side when began questioning who she really was.

The actor had previously played Agent Angerson in the Marvel series Agent of S.H.I.E.L.D.

Naomi was spearheaded by award-winning director Ava Duvernay, the same force behind When They See Us and A Wrinkle in Time.

Speaking on the series, Ava revealed: “She’s on her own path, and I really think that this is the first part of the Naomi-verse, and that people need to be trying to crossover over here [Naomi] is firmly in her story and we are singularly focused on that journey.”

Fans will have to stay tuned to watch Naomi as she figures out who she really is and come to terms with the fact she is a superhero.

Naomi continues Tuesday’s on The CW