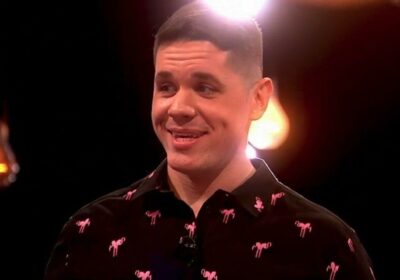 Naked Attraction is known for raising a few eyebrows but romantic hopeful Adam didn't hold back as he praised one potential date for having a "neat vagina".

Gym bunny Adam, 30, had been hoping to find his one true love on Channel 4's Naked Attraction, whittling down six women to two by inspecting their naked bodies.

However, during the first round when all six vaginas were unveiled, Adam found himself lusting over one, in particular, admitting that it was the perfect vagina for him.

While he may have been blown away by Green's clitoris and labia piercing that would have complimented his tongue piercing, Pink was the girl for him.

"It's the vagina that lured me in," he confessed to host Anna Richardson.

The 30-year-old advertising executive went on to say: "It's very neat, it looks like it's been jetwashed.

Before Anna added: "It's had the five-star wax and polish."

However, despite initially lusting over Pink, Adam decided to take Leanne (blue) out after choosing her in the final round.

Things didn't exactly go to plan for Adam though after the 22-year-old had different plans when he asked what they should do after having a few drinks.

Adam suggested he and Leanne "go somewhere and chill" but was speechless when she said she was going home to bed as she had work the next day.

"I'm a little bit sad but you can't win them all," he revealed.

After their first date, the Naked Attraction crew caught up with Leanne and Adam who revealed that they were no longer in contact.

Leanne suggested that the distance between the pair was the reason for not seeing one another again but Adam claimed he was "willing to travel".

This, however, was not the reason, with Leanne revealing that her date had blocked her once the date was over, with Adam later confirming this during a piece to camera chat while sitting next to his date.

During his initial chat with Anna, he revealed that until the age of 18, he didn't feel confident enough to speak to women having been overweight as a youngster.

He said: "My size held me back at school, I got massively bullied, when I was 18, I couldn't even talk to a girl, had low self-esteem, really hated myself.

"I'm single because I haven't had that connection with someone and I think I need to find someone on the same wavelength, I used to be a Ford Focus and now I'm a Porsche."

Stay up to date with the latest news in Showbiz and follow your favourite celebrities by signing up for our newsletter by clicking here.