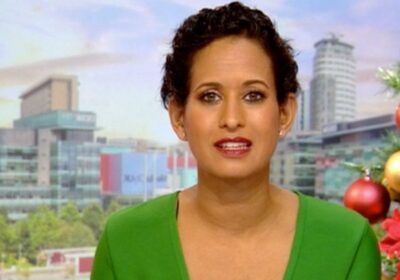 BBC Breakfast presenter Naga Munchetty apologised to viewers after a technical error caused a live interview to come crashing to a halt.

During the Christmas Day special of the news programme, the broadcaster, 45, was joined via video link by a care home resident who was preparing to spend the festive day with his daughter before returning and isolating.

Speaking live from the BBC studio in MediaCity UK, Manchester, Naga beamed with joy as she revealed that resident Ron was going to make the most of there being no coronavirus restrictions this year.

Ron was joined by care home manager Julie who revealed that Court House Care Home had been making the most of Christmas to keep residents happy.

However, the interview was cut short after the internet connection between the studio and the care home appeared to cut out as they spoke about coronavirus testing.

Julie admitted that residents are tested daily after leaving the care home in order to stop the transmission of coronavirus.

While speaking to Ron, Naga was left speechless after the signal cut out, meaning that viewers saw a frozen image of Ron and Julie as he discussed his Christmas plans.

"Aw, that's a shame, I'll tell you exactly what Ron is doing," said Naga before explaining that Ron would be visiting his daughter to celebrate Christmas Day.

Shortly after the brief interruption, the signal cut out again as Ron was explaining that it would be the first time he would be seeing his daughter for the first time in six months.

However, after explaining that this year would be a "very different Christmas" compared to last year's in lockdown, the signal cut out again.

Evidently annoyed by the technological error, Naga fumed: "I think the joys of technology on Christmas Day, those technical gremlins have come out again, never mind."

Earlier this week, Naga and co-anchor Charlie Stayt were left perplexed as they discussed a Christmas activity.

Sports broadcaster Mike Bushell said: "Because it's Christmas, we end by talking about the airspeed velocity and flight of a marshmallow, all because of this."

A short clip of professional golfer Ian Poulter flashed onto the screen.

Mike said: "You thought that was the actual marshmallow? You thought it was roasted or toasted or something?"

Naga replied: "No, I thought the sugar was coming off." She paused for a moment and questioned Mike: "A roasted marshmallow? Roasted?"

"Yeah, you know when you roast it on the fire? It becomes a little more solid doesn’t it, round the outside?" offered Mike.

A confused Naga replied: "Solid on the outside? Squidgy in the middle?" before turning to Charlie and saying: "Have you ever toasted marshmallows?"

Charlie replied: "Well, they would melt, wouldn’t they? I'm not keen on marshmallows."