Home » TV & Movies » 'Monsters at Work' Trailer: Scares Are Out and Jokes Are in for the 'Monsters, Inc.' Sequel Series

'Monsters at Work' Trailer: Scares Are Out and Jokes Are in for the 'Monsters, Inc.' Sequel Series 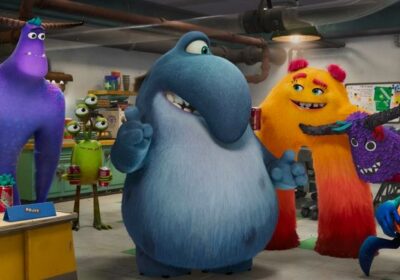 The monsters are back in Monsters At Work, a Disney+ series that continues the story of Monsters, Inc. Monsters once powered their entire world on the fear of children – until they learned that laughter is even more powerful. Now, Monsters, Incorporated is going through some changes as they transition from scaring kids to making them laugh. But for some employees, that’s easier said than done. Watch the Monsters At Work trailer below.

Monsters At Work brings back John Goodman as James P. “Sulley” Sullivan and Billy Crystal as Mike Wazowski, the team that first met in the prequel film Monsters University, and continued their friendship in Monsters, Inc. Sulley is now the CEO of Monsters, Incorporated, and Mike is his partner. And the two are looking for monsters who can make kids laugh. Instead of working as Scarers, the monsters are now considered Jokesters (look, these are Disney’s terms, not mine). Here’s a synopsis:

“Monsters At Work” takes place the day after the Monsters, Incorporated power plant started harvesting the laughter of children to fuel the city of Monstropolis, thanks to Mike and Sulley’s discovery that laughter generates ten times more energy than screams. It follows the story of Tylor Tuskmon, an eager young monster who graduated top of his class at Monsters University and always dreamed of becoming a Scarer until he lands a job at Monsters, Incorporated, and discovers that scaring is out and laughter is in. After Tylor is temporarily reassigned to the Monsters, Inc. Facilities Team(MIFT), he must work alongside a misfit bunch of mechanics while setting his sights on becoming a Jokester.

Bringing Goodman and Crystal back is great, but based on this trailer, Mike and Sulley are going to be supporting characters while the show primarily focuses on Tylor, voiced by Ben Feldman. The cast also includes Mindy Kaling as Val; Henry Winkler as Fritz; Lucas Neff as Duncan; Alanna Ubach as Cutter; Bonnie Hunt as Ms. Flint; John Ratzenberger as Yeti and Bernard; Jennifer Tilly as Celia Mae; Bob Peterson as Roze; Aisha Tyler as Millie Tuskmon; and Stephen Stanton as Smitty and Needleman.

I thought Monsters, Inc. was wonderful when I first saw it, and having revisited it not too long ago, I still think it’s quite good. I know people like the prequel Monsters University, too, but I have to admit that I’ve tried to watch it twice and fallen asleep both times. Maybe it’s just not for me. In any case, Monsters At Work looks enjoyable enough, and will no doubt appeals to fans of the series.