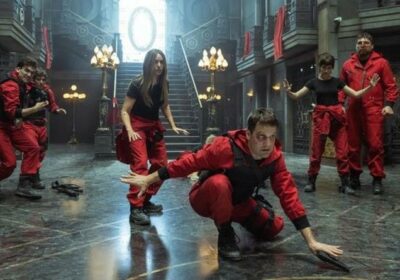 The hit crime series Money Heist from Netflix has recently finished filming and will be released later this year. In the meantime, fans are combing through the promo trailers to see if they can spot any clues for the fifth and final season. One fan thinks there is a hint the series will continue after season five.

The non-English-language series Money Heist quickly became one of Netflix’s most watched of all time and was renewed by the streaming service last year.

Álvaro Morte, who stars as criminal mastermind The Professor, and Pedro Alonso, the terminally ill jewel thief Berlin and The Professor’s older brother, have confirmed filming has finished.

The long-awaited final season wrapped shooting in Denmark, Spain, and Portugal, and the last season will consist of only 10 episodes.

However, as fans patiently wait, many took to Reddit to theorise if the show will continue beyond the original series.

“If You Notice And Read The Caption Carefully You Will Notice ‘The Heist Comes To An End’.

“Not The Series Or Show Comes To End,” they concluded.

Has this subtle clue suggested the world of Money Heist will continue on in the future? And are any spin-offs currently in the works?

Another fan on Reddit was unsure of the future of the Money Heist universe, writing: “As of now the writers and producers have confirmed that the show is ending. But who knows what the future holds.”

“Give me a solid ending. Just please don’t leave things ambiguously so you can maybe continue things later. I think a prequel might be OK,” a third fan replied, clearly unsure whether the show should continue in some way.

Series creator Álex Pina hinted to Oprah Daily recently about the possibility for some spin-offs in the future.

“We do have many possibilities for some spinoffs,” he teased hopeful fans.

“I think that’s thanks to the strong and powerful identities of the characters.

“We’ve always looked for characters to have a very complex, layered design.”

Pina continued: “So I think almost every character of Money Heist has a duality that we would like to see in a spinoff. We could watch any of them in other contexts.”

He later confirmed the series would only be 10 episodes and promised a satisfying conclusion.

Season four ended with multiple cliffhangers and fans are rightly concerned season five will be unable to tie up all loose ends.

Series writer Javier Gómez Santander has put an end to any fan concerns: “I think the series will end very well, this fifth season is very good.”

Santander also confirmed any possibilities of a spin-off would not affect the final season and the character’s story arcs.

Plot details are being kept firmly under wraps to avoid spoiling the show’s epic conclusion.

The first four seasons of Money Heist are currently available to stream on Netflix.