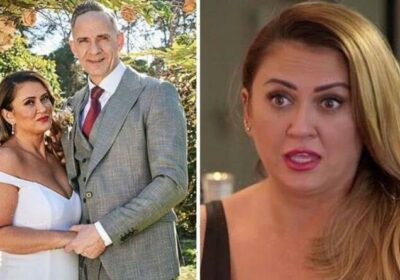 Married at First Sight Australia’s latest season hasn’t been shy of drama and explosive rows across the dinner table. The E4 series remains a highlight in the TV calendar for reality show fans because of this, as well as the blossoming romances that sometimes come from the social experiment. One star who didn’t have the easiest of rides on the 2020 series of MAFS Australia was 51-year-old Mishel Karen.

Prior to joining the MAFS Australia cast, mother-of-two Mishel was described as having “no filter” and had a “disaster” of a relationship history.

She married the father of her children at the age of 20 but that ended after 13 years of marriage when it was discovered he was cheating on her.

Mishel was matched with barbershop owner Steve Burley who appeared to be a good match for her in the early days of the series.

However, their relationship ended in tears nearing the very end of the experiment.

Mishel quickly grew frustrated in her marriage to Steve due to his lack of affection.

He admitted that this was because he wasn’t attracted to his wife which left her upset.

Nevertheless, they continued to stay in the process even though they were just friends.

But in the final week of production, Mishel ended up dumping Steve, packing her bags and saying a teary-eyed goodbye outside of their hotel.

Mishel Karen, who used to work as a police trainer in the police force, was reportedly suspended without pay for refusing to comply with Covid vaccine mandates.

She now works as an X-rated model on OnlyFans and makes around $20,000 [AUD] through the site.

“I have earned a really nice amount of money to help us through this difficult time.

“Well, at least I can pay my new mortgage for a few months,” Mishel told the Daily Mail earlier this year.

She will soon be returning to the small screen but this time on Spencer Pratt’s new series Judge Me.

Pratt, who is best known for starring in The Hills, will act as a mediator between Mishel and her family on the show as she defends her new raunchy career.

As well as stripping down on OnlyFans, Mishel is known for performing “hardcore sex acts”.

Judge Me is filmed in real-time in front of a live online audience who are then able to vote on who they think is right and wrong.

Mishel is also a grandmother-of-one after her son Sam had a baby with his girlfriend.

Her daughter Eva featured in some episodes of Married at First Sight Australia to provide support to Mishel during the process.

It is believed Eva currently works as a curve model in Brisbane.

Married at First Sight Australia is available to watch on Channel Nine in Australia and E4 in the UK.