Stars from the South Asian community are coming together for a virtual block party in support of the Joe Biden/Kamala Harris ticket for the 2020 election.

“Joining forces with our community of brown folks/South Asians for a fundraiser for Biden-Harris is not just a natural evolution of my involvement, but something I’m so proud of. I’m thrilled to be participating in this first-of-its kind get together with other South Asian actors, artists and leaders to help our community unite our around this truly vital cause: essentially, fighting for the rights of all and the preservation of our democracy,” said Eternals and The Lovebirds actor Kumail Nanjiani.

Nanjiani is one in a handful of Hollywood stars set to make an appearance at the South Asian Block Party on Wednesday.  An official fundraiser for the Biden-Harris campaign, the South Asian Block Party will also feature Hollywood figures Mindy Kaling, Lilly Singh, Aparna Nancherla and Liza Koshy as part of its informative and entertaining program. 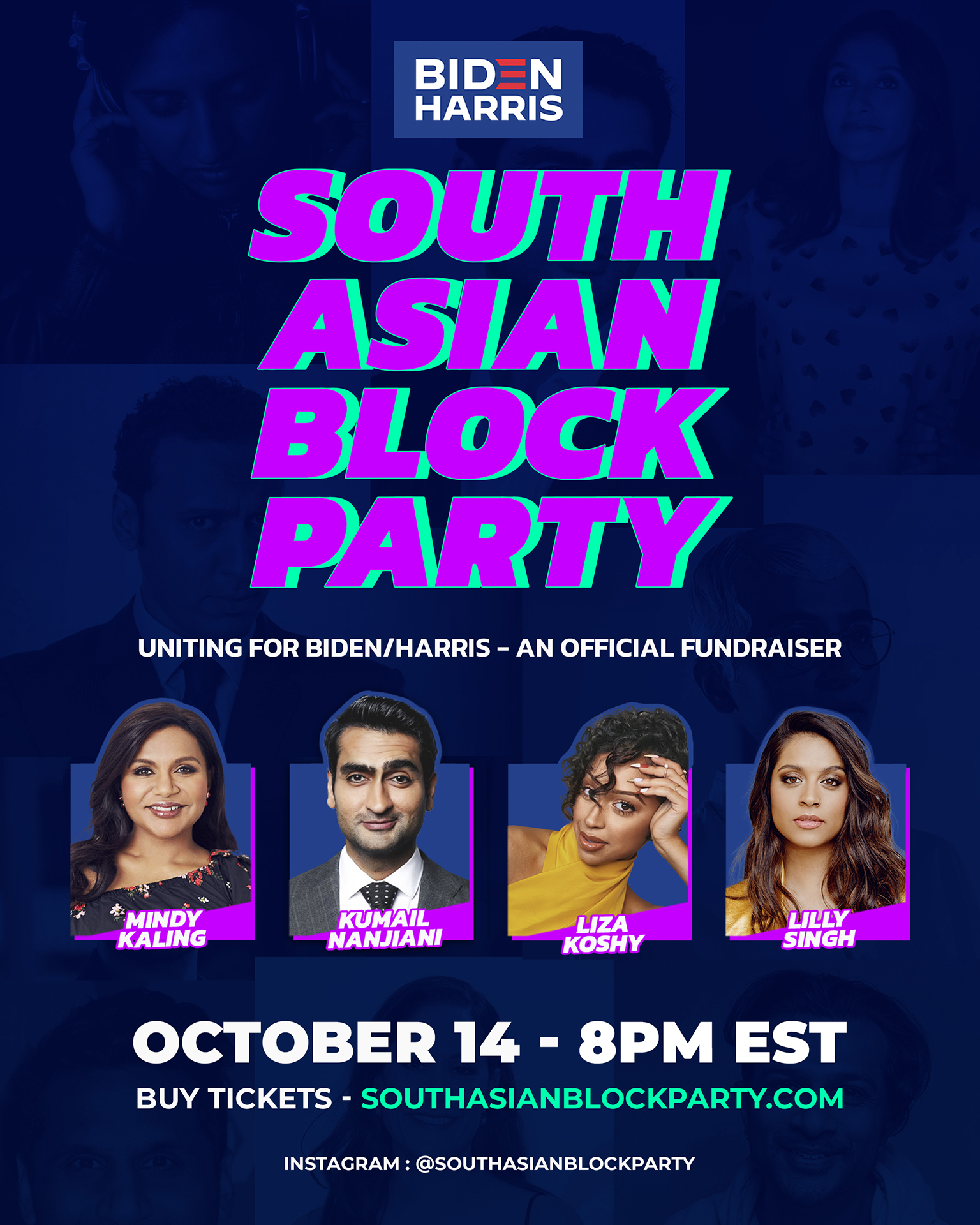 The one-of-a-kind political get together also seeks to celebrate the increasing representation of the South Asian community in entertainment, music, and more, said organizer Rajan Shah.

“It’s about celebrating the community and really engaging youth, leveraging all this incredible talent that exists within this community. I think we take a lot of pride in the success that we’ve had across mainstream pop culture here in America, so this is a great opportunity to use those voices for good,” Shah told Deadline.

The community of nearly 5.4 million South Asians in the United States is comprised of people with a number of different experiences, from older immigrants to second generation youth. Backing former Biden and Harris, who is part Indian herself, is a way to ensure that the South Asian community, with all its nuances, are better represented in American democracy, Shah said.

“Joe Biden and Kamala Harris really believe in this country as being a nation of immigrants,” Shah added. “Rather than being hostile, which is what I think a lot of the community feels with the current administration, we have an opportunity to really celebrate the diversity of the country and really put into office an administration that really understands the very essence of immigrants in this country.”

Wednesday’s South Asian Block Party will not only feature sets from comedians and music from South Asian artists like Madame Ghandi and Emmy-nomined This Is Us composer Siddhartha Khosla, but the event will also include conversations about the topics relevant the South Asian community including immigration policy and health care.

Shah said that while the fundraiser may be the first to assemble notable South Asians for a common cause, he hopes that the event’s impact will go far beyond Wednesday night.

“This is a great first step in creating a new conversation within our community about the importance of voting,” he said. “We’re hoping to also inspire this new generation of young, vibrant South Asians that are in the media and entertainment industry to also get them involved and then hopefully see how they can mobilize their own communities across the country in getting involved in voting and in the political conversation.” 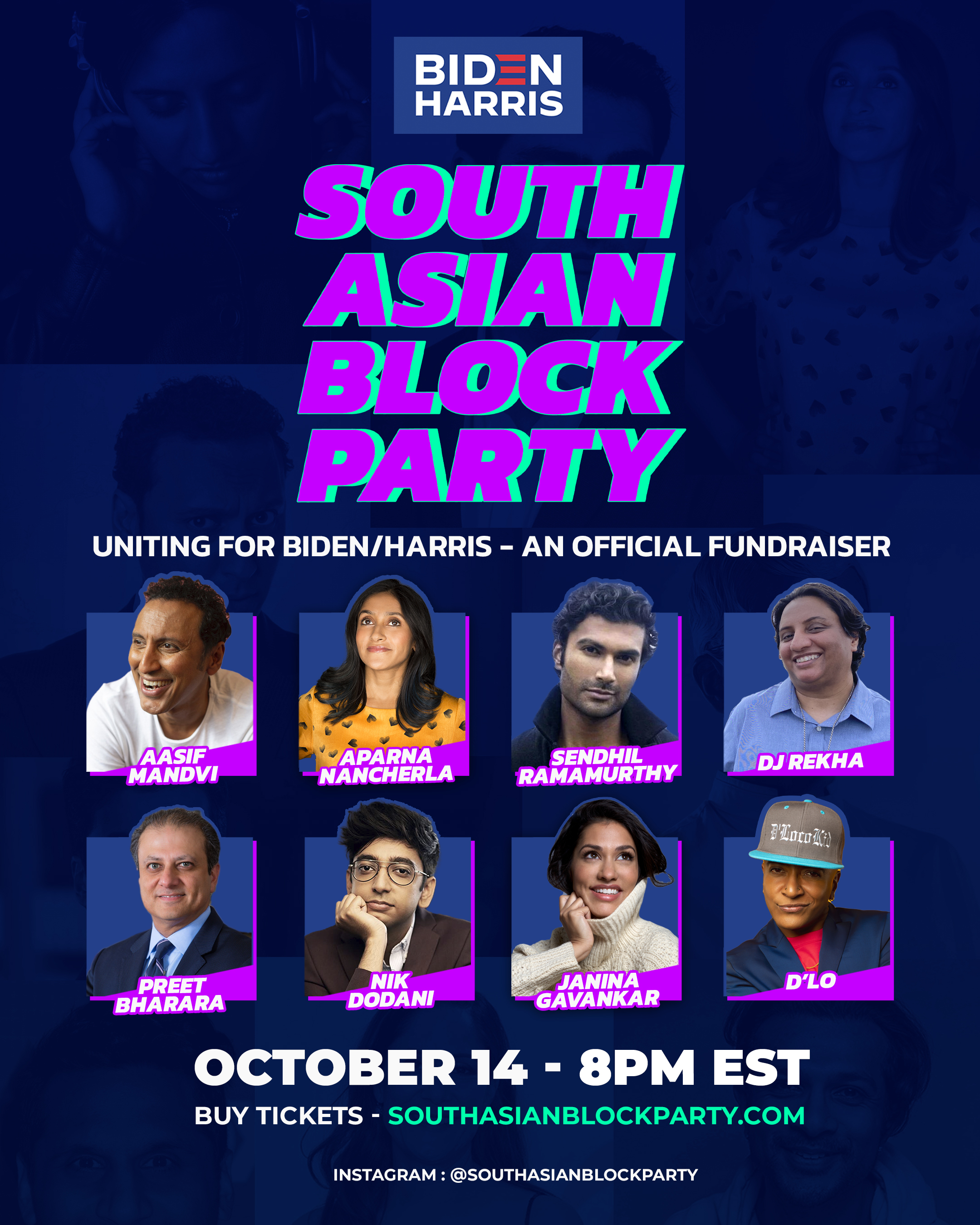 Information and tickets for the South Asian Block Party can be found here.