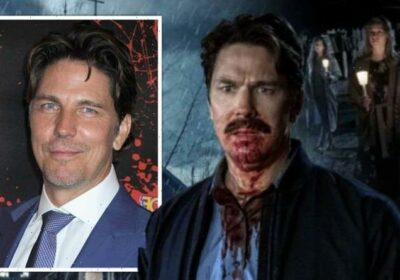 Midnight Mass is the hit horror series that’s had Netflix viewers on the edge of their seats. The series follows the arrival of a quirky priest and the mysteries he brings with him to a dying fishing town. Directed by Mike Flanagan, the horror went down a treat with fans of his previous projects The Haunting of Hill House and The Haunting of Bly Manor. Chatting about the success of Midnight Mass, one of its stars has now teased details of another upcoming project called Midnight Club.

In an exclusive interview with Express.co.uk, the actor opened up about his time working on the hit series and revealed it won’t be the last time he collaborates with director Mike Flanagan.

When asked if he’d like to work with Mike again, Michael replied: “Absolutely! And there is talk, for sure.”

He chatted about how the Midnight Mass director is well known for reusing cast members in new projects.

Michael explained: “The thing about being in the Mike Flanagan and Trevor Macy Repertory Theatre Company is that they do love to bring people back and you never know in what capacity.

“I was fortunate to do an episode in his next project, which is called Midnight Club,” he revealed.

However, the actor made it clear that the upcoming series has nothing to do with Midnight Mass, despite the similar titles.

“It’s just that they were both similarly named and they both happened to supersede each other, one was after the other,” he said.

Michael confessed he wouldn’t be the only familiar face appearing in the upcoming project, as some of his Midnight Mass co-stars will also feature.

He said: “Rahul [Kohli] and I did an episode together in Midnight Club.

“He’s had Henry Thomas and Alex Essoe in an episode, Sam Sloyan. Matt Biedel, Zach Gilford are in the show. Igby Rigney is in the show.

He continued: “I would jump at the chance when Mike and Trevor say they have something coming up. ‘Can you be available? Would you be willing?’ I was like ‘Where do I sign?’

“These opportunities come very rarely in an actor’s career and that fact is not lost on me. I recognise that,” Michael added.

The upcoming Netflix series, The Midnight Club, is a mystery-thriller based on a Christopher Pike novel of the same name.

It’s currently unknown when it will be released onto the streaming service, but filming wrapped on the series in early September 2021.

Fans of Michael can currently watch him in his new film Disappearance at Lake Elrod.

The movie centres around a mysterious investigation as two young girls go missing one year apart.

Chatting about the plot, Michael said he was hooked as soon as he read the script: “Story is always first and foremost to me and this one has a great story.”