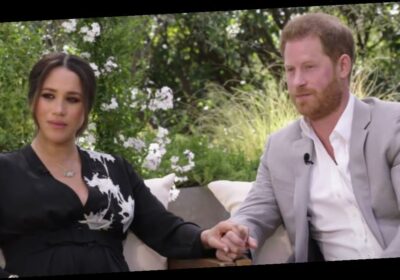 Meghan Markle has been accused by Piers Morgan of being 'shamefully hypocritical' over claims of bullying during her time as a working royal.

The former Deal or No Deal box girl turned Duchess of Sussex has been hit with claims leaked to The Times that she left female staff in tears behind palace walls.

The publication obtained emails which were sent to and from top HR team in the palace outlining the allegations made against her two years ago.

There are also claims that the women in question signed non disclosure agreements meaning they can't publicly speak out about the allegations.

There is no claim Meghan or Harry personally ordered the NDAs.

In a statement, a rep for Meghan Markle said she "is saddened by this latest attack on her character, particularly as someone who has been the target of bullying herself and is deeply committed to supporting those who have experienced pain and trauma".

Piers, 55, said: "If she [Meghan] is going to be the standard barer of how women are treated in life and women having a voice, isn't the right thing for the NDAs to be removed and the women in the palace to have their say? Isn't that what Meghan Markle stands for?"

He added:"After the Harvey Weinstein scandal a lot of NDAs got torn up as it was deemed a suppression of these women.

"These women – if the claims are correct – who were effectively bullied out of the palace an have been gagged. You can't have it both ways."

Piers said: "There are also the claims she twice wore diamond earrings, worn three weeks after of the murder of a Washington Post journalist which we know was a the direction of Crown Prince.

"It turns out they were gifted to her by the Crown Prince and not borrowed as she told her team to tell the media.

"That again, is shamefully hypocritically for someone who constantly rallies for women rights."

Speaking up, Susanna chimed in: "Even if she didn't know about allegations she did campaign for women's rights in Saudi Arabia.

"Why would you think you accept a gift from a country which has issues of human rights?

"The fact of the matter is, if you fire shots you are going to get fired back.

"This is turning very nasty."

A spokesman for the Sussexes said: "The duchess is saddened by this latest attack on her character, particularly as someone who has been the target of bullying herself and is deeply committed to supporting those who have experienced pain and trauma.

"She is determined to continue her work building compassion around the world and will keep striving to set an example for doing what is right and doing what is good."

They added: “We have addressed these defamatory claims in full, including spurious allegations regarding the use of gifts loaned to The Duchess by The Crown."