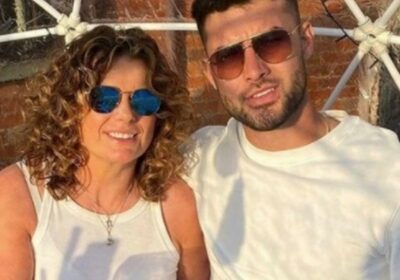 Love Island contestants have been away from home from several weeks and the final of the 2021 series is just days away.

Loyal fans of the ITV2 dating show will know that friends and family members of the Islanders usually make a surprise appearance before the stars wave goodbye to the famous villa.

The meet the parents episode is usually full of tears and tension as relatives share some home truths and embarrassing stories.

It remains unknown if the nearest and dearest of the cast of Love Island 2021 will appear in person or virtually due to Covid travel restrictions.

As viewers anxiously wait for the drama to unfold, Daily Star have had a sneak peek at the parents of some of the remaining stars who are desperate to be crowned the winners of the series seven.

It’s no secret that his daughter Mille Court has had a rollercoaster ride in the villa with partner Liam Reardon.

After his betrayal of Millie with Geordie temptress Lillie Haynes, Rob took to Instagram to share his feelings.

He wrote at the time: “I wanted to dive into the TV tonight and just cuddle my girl real tight. #itwillbeokdarling.”

Rob also added: "Millie has a large and loving family and a fab group of friends of friends behind her for support. We are all so proud of her." Millie’s father is a glassblower in Essex and has been making neon glass artworks since 1987.

He's been keeping fans up to date on his thoughts and feelings of his daughter's time in the villa on social media.

Rob has even shared the odd cheeky joke about Millie and Liam's racy sex scenes.

However, the proud father did say he couldn't watch the moment Millie, 24, dressed up as a naughty nurse and gave Liam, 21, a massage in the Hideaway last month.

Kaz Kamwi's lookalike mum is a huge fan on the ITV2 dating show and even helped her daughter fill out her Love Island application form.

She recently appeared on an episode of After Sun and told viewers what you see from Kaz on the show her "genuine" self.

The proud mother went on to gush about how proud she was of her TV daughter.

Hailing from Wales, Liam Reardon’s mum has been silent on her son’s appearance on the show so far, despite his controversial behaviour at Casa Amor.

But judging from Liam’s Instagram, it’s clear the pair are very close as Liam’s regularly shares snaps of them together.

The 6ft6 brickie shocked the ITV2 show's viewers when he announced his age, with many convinced the Welshman much older.

But despite his young age the cheeky contestant has won over fans in herds, with older sister Niamh revealing in a recent interview that he has a whole army of pensioners cheering him on.

With only a four-year age gap, Liam and Niamh are very close, and his sister has been backing him all the way on the show.

They regularly went out drinking together before Liam headed into the villa, and seem like the best of friends. Toby is very close with his mum Victoria and sister Shauna, who appeared on Love Island Aftersun a few weeks ago to talk about his time in the villa.

His reputation for partnering up with a different girl within a matter of days had shed a negative light on him initially, however, his relationship with Chloe Burrows is going from strength to strength, and he is now one of the villa’s favourite contestants. When asked how it was watching Toby on television, Victoria said: “For the first two weeks it was beautiful. It was slow and it was easy.

"Now I’m seeing Toby come out. He’s the fun Toby. For the first two weeks he was under the cover, under the radar. Now we’ll see the laughs come out. I want to see that boy".

It seems that Victoria also approves of Chloe. She recently told The Sun: "“We always go on holiday together as a family. She’ll be more than welcome to come with us.” Faye’s parents had remained silent on their daughter’s appearance on the show until her recent argument with her partner Teddy Soares made headlines across the country.

Friends and family released a statement on Faye's official Instagram page which read: “While we don’t want to comment on the events of the show, we ask everyone to remember:

"You are watching a highly edited TV show which is created for entertainment – you can never see the full picture.”

In a bid to defend her behaviour, they added: "Faye is human. She may not always get things right.

"There are human beings managing the Islander’s social media pages who will be seriously affected by your comments."