Mary Cook death latest: Gogglebox star, 92, dies peacefully in hospital with family by her side 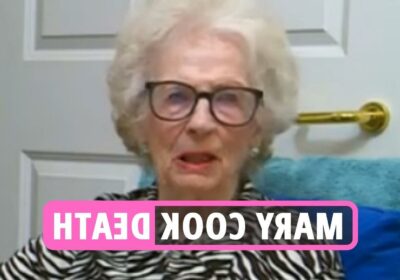 GOGGLEBOX's Mary Cook has died peacefully aged 92, surrounded by her family at her bedside.

The star and TV addict regularly appeared on the popular Channel 4 show alongside best pal Marina Wingrove – and were both loved for their cheeky comments.

Mary, who lived in a retirement home in Bristol, passed away in hospital at the weekend with her family by her side, Channel 4 and Studio Lambert confirmed today.

A statement said: "We are extremely saddened to share that Gogglebox star Mary Cook passed away in hospital this weekend at the age of 92 with her family by her side.

"Beloved mother, grandmother, great-grandmother and dear friend to many, Mary, who worked in the hospitality trade, had been married and widowed twice."

Read our Mary Cook live blog below for the latest news and updates..