Martin Roberts rants about common space found in most houses ‘What’s the point?’ 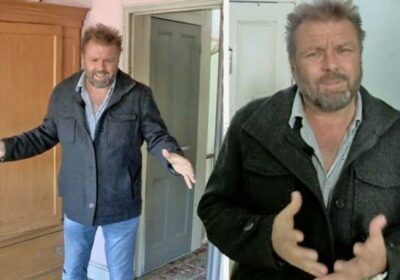 Martin Roberts was in Suffolk in a recent episode of Homes Under the Hammer. The property expert was visiting a terraced house which was on the auction market for a guide price of £90,000 but within seconds of walking through the front door, he ranted about a space most houses have.

“I’m heading off to the historic Suffolk country town of Ipswich, which in 2015, was rated the third happiest place to live in the UK,” he told those watching at home.

“Just two miles from the centre of Ipswich is the property I am here to see; it sounds pretty appealing, it’s a two-bedroom mid-terrace, guide price £90,000 plus, nice brick-built exterior, let’s have a look inside!”

Shutting the front door behind him, Martin said: “Straight into a corridor – I’m going to say something really random here, why do so many houses have corridors when you come through the door? What is the point? This space is really annoying.

“Tell you what, let’s not have this wall here and have a nice big space when we come through the door instead of a little porch space. Wrong place for a corridor! Anyway, rant over.”

Moving on, he added: “What have we got? Corridor! We’ve got a front living room, looks like there is a nice old fashioned fire there which is good news.

“Working out way through, it is obviously very dated – look at these light switches – but actually, look at this!” He said pointing at a light switch and the wooden board behind it.

“See that? That could be a problem, it might just be wood or what worries me, the age of the house, the light, that is there, that could actually be an asbestos sheet, so you’ve got to be really careful when you come to do any demolition.

“If it is [asbestos] then you need to get the professionals in to treat that very carefully,” Martin warned.

“Through to the rear of the property, you’ve got a nice sitting room then onto to a kitchen which obviously needs some work.

“It is a fairly standard layout but you could do so much to improve it!” Viewers were told.

As for upstairs, there were “two really big bedrooms” towards the side of the property.

“And then,” Martin began. “It all goes a bit wrong…because I can guess this was the third bedroom at some point in the property, it’s now the bathroom.

He then walked into one of the bedrooms and said: “There’s something not quite right about this room. This is the front bedroom and it just feels wider, it’s wider than the front of the house!

“I need to investigate,” he added.

Back downstairs, he had another look at the room sizes before heading out the front and spotting a passageway which led through the terraced houses to the back.

“This is the reason why it is so much bigger upstairs in that room,” Martin exclaimed.

The back garden itself was pretty big but the only toilet in the house was also outside.

“There’s plenty of space to consider an extension to the back,” the presenter said. “That would allow you to expand the kitchen and get the toilet upstairs, or you could reclaim the shower room as a third bedroom, in which case, you would need to find somewhere else for a bathroom.”

As for what happened to the property when it went to auction, it was sold for £120,000 to Edward on behalf of his friend Alex.

When Martin asked Alex why he wanted to buy the terrace, he replied: “I had planned to build something from scratch and three bits of land fell through, and this came up at auction, and I need somewhere to live and I went for it.”

The terrace would be his home in the short term and would allow him to find out whether he enjoys property renovating and developing.

Homes Under the Hammer airs weekdays at 10am on BBC One.