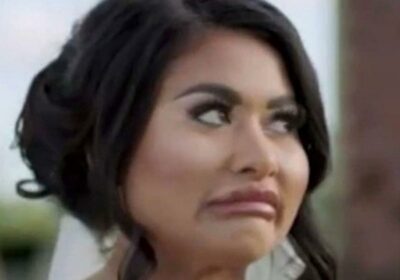 Married at First Sight star Nakita Jasmine has spoken out since the first episode of the series dropped on Monday night which saw the brunette beauty marry her new husband Ant Poole.

As viewers tuned in for the first episode of the series, they couldn’t help but giggle away after the 27-year-old revealed her very specific criteria and upfront honesty when she met her new husband for the first time.

Fans were left in hysterics after they learnt of the raven-haired vixen’s high standards the producers were tasked with when she specifically asked for a man who was six feet tall with muscles, green eyes and nice teeth.

But the star was surprised with the man who was waiting for her at the end of the aisle and she couldn’t help but address the elephant in the room.

Viewers were treated to an explosive rant as she debated whether or not to marry her 28-year-old partner Ant who she had been matched with by the dating experts.

She argued: “They’ve just done the total f***ing opposite of what I've asked for.

“I mean obviously I was talking about looks quite a lot. Looks was a huge thing to me and I don’t think they’ve listened to what I said.”

But Nikita was faced with an overwhelming wave of backlash from viewers watching the show as they flooded her social media accounts with negative comments online.

After reading many of the comments online, the Geordie gal jumped on her Instagram stories to clear up some of the rumours that had been swirling around online.

She clarified: “I’ve had to jump on because literally my phone is going crazy and people just need to remember that it is reality TV and I actually had a lovely day.

“It’s always edited to look worse. My bridesmaids actually got on really well with Ant’s friends and we actually had an amazing day but obviously the bad parts.

“Not all weddings can look fine and dandy because it would be boring,” she concluded.

The opening episode certainly went off with a bang, but fans are suspicious as to whether or not Nikita and Ant will be able to make their relationship work throughout the show.

Married At First Sight continues from Monday to Thursday's at 9pm on E4.