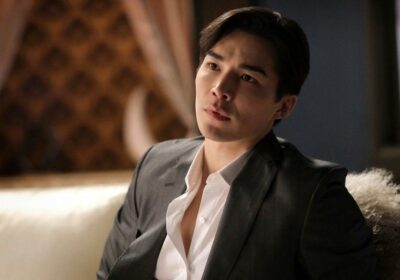 Ludi Lin is adding a bit of flair to The CW’s Kung Fu.

On Wednesday’s return, titled “Isolation,” Lin’s dashing playboy billionaire’s son, Kerwin Tan, finds himself aligning with the least likeliest person: Zhilan (guest star Yvonne Chapman), Nicky’s fiery nemesis who’s also on the hunt for the eight weapons. But as mysterious as Kerwin is on the outside, the latest hour reveals scars from his past — mainly at the hands of his estranged and abusive father — and may be far more broken than previously thought. (Watch ET’s exclusive sneak peek from the episode above to get a better grasp on Kerwin’s relationship with the Tan patriarch.)

“With Kerwin, he’s that kind of character where slowly more is revealed about him. There’s a lot of background, a lot of depth to it, but it’s not immediately apparent because it speaks to the fact that everybody suffers no matter where you are and no matter where you come from,” Lin tells ET. “He can come off as a very charismatic, good-looking playboy, but what drives him is slowly revealed as Zhilan pries open the door.”

Ahead of the episode, the Mortal Kombat star discusses his character’s contentious (but red-hot) relationship with Zhilan, Kerwin’s mysterious past and why he’s actively seeking out projects that celebrate Asian excellence.

ET: How has it been being welcomed into the Kung Fu family?

Ludi Lin: It’s really exciting. It’s like you said, it’s actually truly like a family. Everyone on set — the whole cast, crew, scene producers — they always work so cohesively and are super open to ideas. I never had an idea just completely shut down, always keeping it fresh. On set and off set, we hang out and it’s just a really nice bonding experience.

Your character, Kerwin Tan, is somebody who, on paper, immediately jumps off the page…

Because of the name?

That’s what jumped off the page for me first. I was thinking, “Where does the name come from?” Eventually I found out, but I think I’ll let people know it’s a fascinating story. I think I’ll keep it a mystery for now.

What about him intrigued you or excited you about getting to dig into this character?

There are two things. One, the really interesting and sometimes dangerous relationship he has with Zhilan really, really shocked me about the character. I thought that would be really fun to play with them and play out in a really exciting and fun arc. And then secondly, he’s kind of like the doorway to opening up a larger world in Kung Fu, where someone else besides Zhilan, maybe a greater darker power in the Tan family is going to be brought in.

You touched on Kerwin and Zhilan’s dynamic. They have a very complicated relationship, which is further explored in this week’s episode.

The relationship is very National Geographic. I think there’s a lot of beastial survival and I guess romantic or love instincts in it, whether it’s a dog-eat-dog world. Is it like a black widow situation where she consumes him? Or are they going to end up being lobsters? Because right now they have the same apparent goal but for different reasons. They come from the same sort of family traumas. So do you end up hurting each other more or can you complement each other in healing and bringing out something greater? I’m not sure. That’s the interesting part for me.

You find out a little more about what’s driving Kerwin in terms of his desires as to why he wants to align with Zhilan. Can you set up what we’ll find out with his backstory and complex family history?

With Kerwin, he’s that kind of character where slowly more is revealed about him. There’s a lot of background, a lot of depth to it, but it’s not immediately apparent because it speaks to the fact that everybody suffers no matter where you are and no matter where you come from. He can come off as a very charismatic, good-looking playboy, but what drives him is slowly revealed as Zhilan pries open the door. I think Zhilan is very good at that. She’s obviously very agile and great at martial arts, but she’s also good at mental manipulation. As she pries it open, more is revealed to Kerwin. But does that end up impressing Zhilan when I first got the character? I really, really hope it did, because I was hoping for some redemption even for the baddies.

This episode tees up the race to retrieve the remaining weapons and it becomes clear Zhilan and Kerwin’s mission. What awaits them?

It’s really appropriate that there was a little break and now the rest of the episodes are going to play out because we’ve entered into a new realm, a new ball game, so to speak. Now the mission is fairly clear for both sides to get the remaining weapons. I can say that there’s going to be a lot of twists and turns because you don’t know where the relationship is going to end up with Kerwin and Zhilan, how that’s going to play into Nicky’s world on the other side. Each episode is going to bring some sort of surprise, and of course, there’s never a shortage of action or sex in these episodes.

There’s going to come a point where Zhilan and Kerwin are going to come face to face with Nicky and her crew. Should we expect a standoff or showdown to come to fruition soon?

That’s a great question. What’s really interesting about these last episodes is the more you get into these weapons and their backgrounds, the more you get into each character’s own personal background, the more of the world of Kung Fu opens up. And the history behind the weapons and their philosophy is based on ancient myths and that has to do with the eight symbols and what kind of energies they unlock. It really opens up to a greater universe. Of course, working on the show, it’s the first of its kind. There’s a lot of learning involved and there’s never a shortage of excitement because we keep discovering new things, just talking about the scripts and finding things to the characters and how they can come through the story.

A couple months ago, you wrote an eloquent note on Instagram about why you’re actively choosing to participate in shows like Kung Fu because of what they represent and sharing a larger vision of the Asian community that perhaps hasn’t been delved so deeply before. How have you continued that march in your career?

There’s two sides to it. One side is very personal and somewhat selfish is that I learn a lot from participating in these stories because I’ve forgotten a lot of knowledge I had when I was a kid. When I was a kid growing up in China, I was really into ancient history and the 5,000 years of mythology. After I moved away, I lost touch with that. Now I’m beginning to realize that for 5,000 years people weren’t just doing nothing. They had worthwhile stories and stories can impact humanity in a lot of ways that has to do with the philosophy in Taoism. So that’s one way I’m learning on my own. The second way is I want to share that with the world because I think a narrow-minded or one-world perspective is dangerous. To share and to talk and to listen and to learn, that’s what I want to do. That’s the game I could play on forever and I want to keep playing. And I want to tell that story.

Is there a specific story or something you’re passionate about that you hope to see come to fruition on screen?

There are so many and they’re already happening. I just saw recently that DC incorporated the Monkey King into their canon and Journey to the West is a story I grew up with. There’s so many different legends and so many different mythologies that are fascinating and they’re constantly being created. Just to be able to get people familiar with Chinese culture, the language, Asian culture in general, so that we can share and listen and appreciate each other’s cultures, that’s something I would really love to see in the future. When someone wants to take something from the Asian culture and reimagine it as their own and use it in a way that’s respectful to the story, I really don’t mind that. I think all cultures are meant to be shared. When we make things like Kung Fu, or we tell the story of the Monkey King, I don’t think we’re just telling it to the Asian people. I think we’re meant to share the story with everybody, so we can have something we can all enjoy together as one human race.

Circling back to Kung Fu, I feel like there’s something bubbling under the surface between Zhilan and Kerwin.

Stay tuned. It should be really fun. And I think each episode after that, it’s just a step up from the previous one.

Kung Fu airs Wednesdays at 8 p.m. ET/PT on The CW. For more, watch below.

Behind the Scenes of ‘Kung Fu’ With Star Olivia Liang (Exclusive)