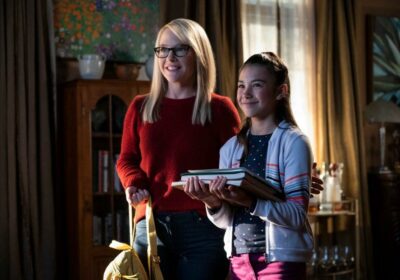 Lucifer Season 6 gave proper sendoffs to all of its main characters when its final episodes arrived on Netflix in September. And even if Tom Ellis’ devil and his partner Chloe Decker (Lauren German) didn’t get the ending fans imagined for them, the show brought their story full circle. The same can be said of the series’ other major players. However, there is one character fans wanted more closure for in season 6: Trixie (Scarlett Estevez).

Lucifer Season 6 ends Lucifer and Chloe’s story with Lucifer returning to Hell to save all the souls stuck there and Chloe raising their daughter, Rory (Brianna Hildebrand), on her own. They’re later reunited following Chloe’s death, nixing the possibility of any spinoffs or sequels centered on the couple.

Similarly, Amenadiel (D.B. Woodside) and Maze (Lesley-Ann Brandt) get complete endings. The former becomes God, while the latter marries Eve (Inbar Lavi). And although Linda (Rachael Harris) and Ella (Aimee Garcia) remain on Earth, fans get the idea they get relatively happy endings after saving the world.

Lucifer‘s younger generation of characters are the only ones whose fates are left open-ended. Rory learns the truth about her father and stays with her mom until her death. However, everything from there on is a mystery.

Meanwhile, Trixie gets significantly less screentime than her half-sister during Lucifer Season 6. That takes her out of the main storyline and even excludes her from much of the drama centered on her immediate family. Needless to say, fans felt the finale could have done better for Trixie’s character.

Fans wanted this ‘Lucifer’ character to get more closure

While all the characters receive fittings endings, fans feel like Chloe and Dan’s (Kevin Alejandro) daughter Trixie got the short end of the stick. Not only does she seemingly remain in the dark when it comes to Lucifer and her half-sister, but she doesn’t even get a final scene with her mother before she passes away. Given her close relationship with Chloe for most of the series, her absence in the final season left its mark on fans.

One viewer wrote on Reddit that it felt like “a major character was just left out of the ending.” They questioned whether Trixie ever discovered what was really happening with Lucifer and where she was during Chloe’s final moments:

“After finishing season 6, I felt closure on all of the characters but Trixie. I wanted to know how they explain Lucifer’s disappearance and her winged sister. I was also very confused when Trixie wasn’t at her mothers death bed.”

Others echoed the sentiment, expressing disappointment with how Lucifer handled Trixie’s character during its final run.

“For a character we watched grow up on the show, I was very sad we didn’t get even a hint of what happened to her in her adult life and there’s literally no excuse for that,” one Redditor wrote.

“I’m so sad about Trixie,” another Redditor added. “Almost as though she was replaced with the ‘real’ daughter.”

Trixie may not have been pivotal to the main plot, but fans clearly missed her character in season 6. Why didn’t she appear as much as in previous seasons?

Where was Trixie in season 6?

While Trixie’s absence in Lucifer Season 6 creates a jarring experience for fans, it stemmed from the actor’s other commitments. Estevez signed on for several Disney projects following Lucifer Season 5, which Netflix originally billed as the series’ final outing. According to Looper, Estevez’s roles in Bunk’d and Christmas Again might have interfered with filming.

So, while fans may miss Trixie in season 6, it seems her decreased role was inevitable. It’s a shame she didn’t get the same farewell the other characters did. However, viewers will always have the first five seasons to enjoy her character.

All six seasons of Lucifer are currently streaming on Netflix.