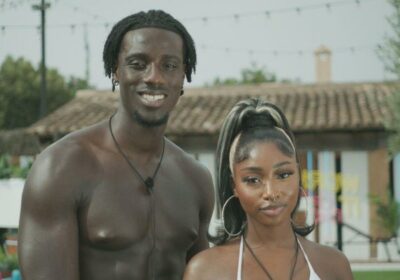 Love Islanders Ikenna and Indiyah have finally shared their first kiss after a tumultuous start to their relationship.

The pair have shared a series of make-or-break chats in the villa as they struggled to connect since being paired up by the public during the launch episode.

Tonight, fans will see the pair finally share a smooch after cuddling up in the garden.

Indiyah tells Ikenna: “Sometimes it is nice to know that you’re feeling me, that you’re interested or if it’s reciprocated.”

Ikenna reassures her: “You know how I feel any way about you” to which Indiyah replies: “I know but you just say it…”

This leads to the pair leaning in for their very first kiss.

A happy Ikenna says: “I feel like this was overdue, but I wanted it to mean something” before going in for another passionate kiss.

Indiyah admitted the mortifying blunder during a chat with Amber, saying he was wasn’t grafting hard enough to win her affections, and claimed she couldn’t even remember his name.

She went on to guess similar names, and said she thinks it begins with an ‘I’ but wasn’t certain.

Fans called the blunder a violation.

“Nah Indiyah that’s a violation, she hates him doesn’t even want to know his name,” blasted one viewer.

However, viewers were completely surprised by Indiyah Polack and Ikenna Ekwonna’s ‘cute chemistry’ during Saturday’s episode of Unseen Bits.

in the first instalment of spin-off episode, the pair shared several adorable moments behind the scenes, which has prompted viewers to call for more screen time between the pair during the main show.

One endearing interaction involved the hotel waitress, 23 admiring Ikenna’s pedicure, and was later seen giving him a brief lesson about the sun and moon.

‘Is that what you learn with horoscopes,’ he asked.

We would of thought indiyah and ikenna hated each other without these unseen bits,’ one person tweeted.

‘The fact love island tried to make indiyah and ikenna look boring and distant when in fact they aren’t doesn’t sit right with me,’ one person wrote.

‘No, I just went to school.’ Indiyah quipped.

While viewers were in awe of their undeniable chemistry, many were confused why ‘the good content’ wasn’t shown during the week.