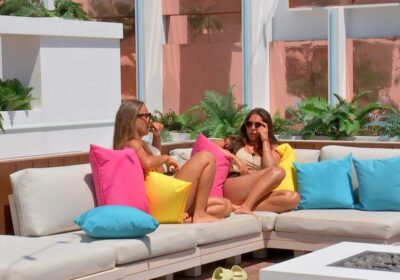 Love Island fans breathed a sigh of relief this week as not only has 21-year-old Danica finally coupled up with someone with whom she feels "a vibe" at last, she also narrowly escaped last night's mass dumping from the villa which saw islanders say farewell to a whopping four people.

Lacey Edwards, Deji Adeniyi, Nathalia Campos and Reece Ford were dumped, having failed to win the hearts of anyone in the villa convincingly enough for viewers to vote for them.

New couple Danica and her beau Jamie, a 27-year-old footballer who plays for Halifax town, survived the dumping and remain in the villa.

In tonight's episode, we'll see Danica keen to make a go of it with Jamie and turning to Gemma Owen, 19, for advice. Gemma, of course, knows a thing or two about footballers as she is the daughter of England football legend, Michael Owen.

Admitting she’s gone from '0 – 100' with Jamie, Danica asks Gemma’s advice about the hearts and minds of footballing men. She says: “I know there’s sometimes a bit of a stereotype. Is he the kind of guy, young footballers, go into the clubs… I do forget your dad is primetime…”

Gemma replies: “He (meaning Jamie) knows he’s decent looking, he knows he can probably get girls… But it genuinely does depend on the type of person.”

Danica admits her feelings are growing for the Halifax star saying: “I don’t want to be naive… I feel stupid saying it, I do really like him. And Gemma comforts her saying: “That’s not stupid at all. If it clicks then it clicks.”

Danica says: “I just have to hope and believe that the Jamie I’m seeing now is him and that is exactly what he’d be like on the outside.”

Speaking in the Beach Hut later on Danica adds of Gemma: “Her mum and dad have been together since they were god knows how old, so you know, dreams do come true.”

Danica has been unlucky in love since the start of her Love Island journey. She's been coupled up with several islanders but failed to form a lasting connection with anyone.

Fans have teased on Twitter that Danica comes across a bit business-like when she's chatting to boys. One viewer commented: "Danica kisses like it is a business negotiation. No passion."

Another added: "Danica is so cute and funny, y’all need to stop teasing her for her little business proposals." A third said: "Dear Reece, I'm sorry but unfortunately you've been unsuccessful. Sorry for any inconvenience this caused you. Kind regards, Danica."