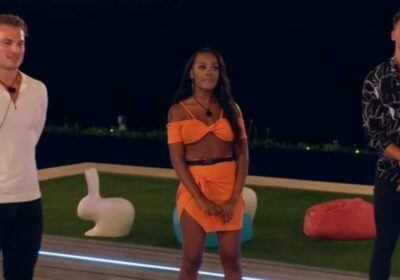 Love Island lads Brad McClelland and Chuggs Wallis might be in trouble, as their chance at surviving in the villa – bombshell Rachel Finni – doesn't fancy either of them.

The 29-year-old made a brief appearance on the show on Friday night's episode when she was given a big task.

She was told that, in 24 hours, she would have to couple up with either Brad or Chuggs, while the other would be dumped from the villa.

Brad ended up single after Faye Winter coupled up with Liam Reardon instead, while Chuggs was partnerless after being a late arrival.

And while one of them will be saved for sure, it doesn't sound like Rachel will be settling with either of them – as neither has turned her head.

Speaking before entering the villa, the luxury travel specialist said: "Aaron is very attractive and seems down to earth. Our jobs are similar so I think we'd have interesting conversations."

She went on: "Hugo seems like boyfriend material – handsome, charming – and I'd like to crack his shell a bit more."

Rachel finished: "And Toby – he's attractive, cheeky. I'd definitely have a lot of fun with him but I need to see if he's worth pursuing."

Of the three lads that she's got her eyes on, it's Hugo Hammond that would cause the least amount of friction if she got with him.

He is paired with Chloe Burrows after Friday's re-coupling, with the blonde beauty choosing him so he could stay in the villa and find love.

Aaron Francis is coupled up with Sharon Gaffka, and it seems they're a good match as they've been getting to know each other – and playing tonsil tennis – all week.

Meanwhile, Toby Aromolaran is coupled up with Kaz Kamwi, which may prove to be a slow-burner romance.

Toby and Kaz have been paired together since the first episode – but it wasn't necessarily by choice.

Bizarrely, none of the guys decided to couple up with 26-year-old stunner Kaz, meaning Toby was paired with her after his first choice was taken from him.

The series is already off to a dramatic start, as Shannon Singh was dumped in record time – just two days – after Chloe coupled up with her pairing Aaron, leaving her single – and without a place in the villa.

But with bombshells coming in left, right and centre, who'll be next out of the show?

Love Island airs each night at 9pm on ITV2 and ITV Hub, with episodes streaming the next day on BritBox