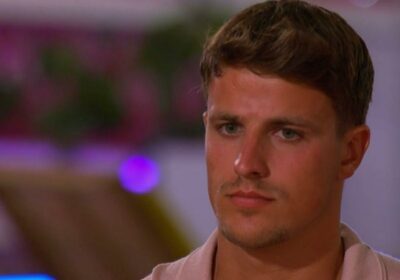 Love Island contestant Luca Bish has come under fire for his "rude" reaction after he was chosen to be in a couple with Danica Taylor.

Fishmonger Luca was left evidently disappointed when Danica decided that she wanted to share a bed with him during Sunday night's episode (June 19).

Due to the fact that Luca was previously in a couple with Gemma Owen before he was picked by the professional dancer, the 23 year old was clearly left reeling by Danica's decision.

But Luca's reaction didn't sit well with fans and they begged him to have some "decorum".

Taking to Twitter, one person penned: "Luca should have some decorum. This isn’t fair to Danica."

Someone else wrote: "Luca acting upset over the new girl choosing him!!! His deffo playing a game!! The moment Luca heard 12 horses it was over for every other girl!!! His looking to retire his fishmonger boots!!! Cos you can tell he liked Danica!!"

A third wrote: "Luca is getting on my nerves tbh, sure Danica should’ve read the room but he doesn’t have to be an a** about it."

While a fourth added: "I don't know why Luca is fuming, and making Danica feel soo horrible. Just relax????"

But providing an opposing view, someone thought Danica may have had an ulterior motive with her choosing and said: "I'm gonna be honest here, in my mind Danica went in there with bombshell arrogance thinking that she could pull Gemma down a peg or two and take her man. I think Luca took exception to her trying to use him to mug Gemma off and that's his reaction to it."

During the episode, the awkwardness certainly didn't stop there as Luca and Danica were told to go on their first date together the following day.

Feeling hesitant, Luca still decided to go along with the date but still didn't appear to be too happy about the idea.

But viewers seemed to thank the producers for ramping up the heat on the show once again.

Taking to Twitter again, one person penned: "I'M HOWLING at the LI producers sending Danica and Luca for a date. They said Luca you will get to know this girl BY FORCE!!"