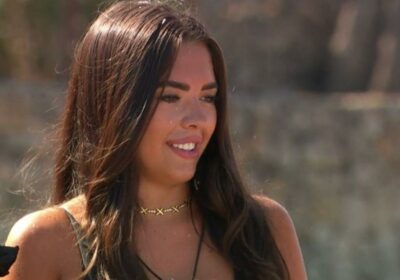 Love Island babe Gemma Owen fumed at her pal Ekin-Su before storming out of the room and telling her to "shut the f*ck up".

Ekin-Su was doing a "baby voice" during Unseen Bits on Saturday night (July 23) and Gemma sternly told her to stop (see above video).

Telling her to stop doing the unusual-sounding voice, Gemma told her that she was making her "skin crawl".

Fuming because Ekin-Su wouldn't stop, Gemma told her to "shut the f*ck up" before storming out of the room in a complete mood because she didn't want to listen to Ekin-Su do the baby voice anymore.

Although Michael Owen's daughter wasn't a huge fan of Ekin-Su's baby voice, fans and viewers at home "loved it".

One took to Twitter and said: "LMFAOO EKINS BABY VOICE HAD ME IN TEARSSSS THIS QUEEN CAN DO ANYTHING!! HER AND DAVIDE ARE LITERALLY CARRYING THIS SEASON CONSISTENTLY!!!"

Another added: "ekin su’s baby voice needs to be cast in cartoons worldwide. i won’t stop until she has baftas in hand."

While a third person, who was clearly very impressed, penned: "Ekin’s baby voice is actually so good."

Some people did agree with Gemma though, with some saying that Ekin-Su's baby voice made their "skin crawl" too.

"That baby noise and voice by Ekin Su is legit the most disturbing thing I’ve ever heard #loveisland," said one person who agreed with Gemma.

And a second added: "I love Ekin but that baby voice makes my skin crawl," complete with a crying emoji.

This comes as Love Island gears up for its epic finale next week on Monday, August 1.

*Love Island airs weeknights and Sundays at 9pm on ITV and ITVHub, with Unseen Bits airing on Saturdays