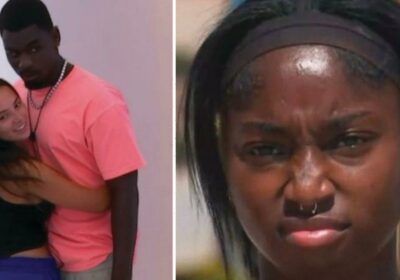 For a while now, fans have picked up on Paige and Dami's close bond and unlikely friendship – with many speculating that the pair might actually have romantic feelings for each other.

And now after a game of Snog, Marry, Pie – fans reckon Dami's love interest Indiyah might have clocked the bond too.

During Snog, Marry, Pie, the Islanders were tasked with choosing who to kiss, who to propose to, and who to throw a cream pie at.

Usually the Islanders will choose to kiss or snog a friend, marry the person they're coupled up with, and pie someone who previously pied them or might have had a feud with.

But everyone in the villa – and at home – was completely taken aback when Paige got down on one knee for Dami and proposed to him with a shiny ring.

Paige, who is coupled with Adam Collard, decided to snog her love interest but propose to her so-called "best friend".

Fans were quick to slam Paige and Dami's bond as "weird", while others noted Indiyah's reaction.

"Dami is clearly in love with Paige and is staying with Indiyah for the vote," said another.

A third added: "Dami and Paige have a weird thing going on."

This isn't the first time fans have clocked the bond between Paige and Dami.

During Casa Amor, Paige told Gemma Owen how she was missing the main villa, before saying that she missed Dami, the Irish microbiologist.

"Paige you’re in love with Dami we get it ah ah," speculated one viewer.

While another added: "Paige and Dami is secretly in love!!"

*Love Island airs weeknights and Sundays at 9pm on ITV2 and ITVHub, with Unseen Bits airing each Saturday.