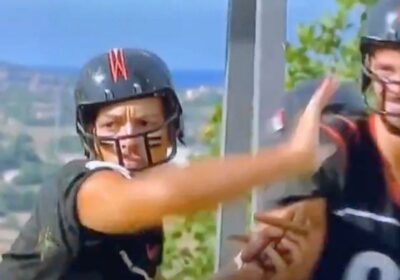 Love Island fans have been left in stitches after they watched Hugo Hammond target Toby Aromolaran in the American football themed food challenge on Wednesday night.

The long-forgotten rivalry between the budding bachelors looked as though it was ready to kick off again during the latest team challenge.

The game asked the female contestants to cross the football pitch while their partner shielded them from the various condiments the boys threw at them, with the cleanest uniforms crowned the winners.

Viewers watched a determined Hugo launch ketchup and mustard at his fellow Islander with an intense passion as Toby and Chloe stepped up to the challenge.

But many viewers believed that Hugo used the challenge as a way to unleash his frustration and what fans thought of as “hatred” at the happy couple after he ended his friendship with the professional sportsman.

And it appears his actions haven't gone unnoticed after Toby’s family members also thought there was some anger behind his competitive nature on the show.

From Toby’s official Twitter account, a family member agreed: “So much hatred behind these throws,” with a cry laughing face.

Another user added: “I'm in tears Hugo hates Toby so much look at him,” with a crying emoji.

A third penned: “Hugo is pelting Toby and Chloe haha think he might be mad Chloe took him back.”

The pair initially formed a brotherly bond when the boys entered the villa, but they soon grew apart after Toby coupled up with Abigail Rawlings, 27, instead of Chloe after just one day in the villa.

Close confidant Hugo was quick to come to the defence of his Love Island bestie as he coupled up with the blonde bombshell and gave an emotional speech as to what an amazing person she is.

He said at the time: “If I'm completely honest, she doesn’t deserve to be treated how she has been this past 24-hours.

“I firmly believe that a lot of this test stuff is complete bulls**t. You deserve someone who is honest and communicates with you and who knows what could happen. Stranger things have happened.”

But Toby couldn't shake his feelings for Chloe and the pair recoupled again when he returned to the main villa.