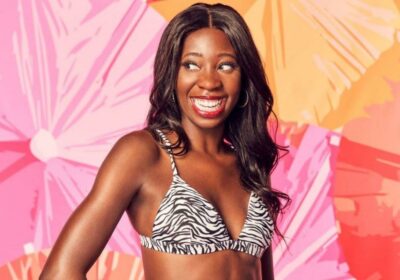 Many Love Island fans were shocked by Charlie Lynch this season. That’s because he chose someone else instead of Cashay Proudfoot. She revealed why she knew he wasn’t going to pick her and more.

Cash had a strong connection with Melvin “Cinco” Holland Jr. and was coupled up with him. But he later chose to try to be with Trina Njoroge. Cash tried to move on with Charlie after Casa Amor, but she still had feelings for Cinco. Cinco decided to end things with Trina and try to fight for Cash.

Cash still picked Charlie, but it didn’t take long for her to regret it. Charlie started to hit it off with Alana Paolucci and it looked like he was considering leaving Cash for her. Charlie told Cash he didn’t think they would work and she immediately got upset. Later she claimed everything was fine as long as he’s honest with her.

Charlie ended up picking Alana and no one picked Cash. She was sent home which shocked many fans who were rooting for her.

Cash says she knew Charlie wasn’t going to pick her

Cash went on Instagram Live on Aug 10 with Love Island’s official account. She claimed that she wasn’t surprised when Charlie didn’t pick her.

She said her last big conversation with Charlie actually lasted 45 minutes. In the middle of that, she realized she was fighting for something she didn’t want. Cash mentioned that she didn’t feel comfortable with the idea of Charlie meeting her parents, so she wanted to go home sooner rather than later.

When host Arielle Vandenberg revealed Cash will be going home Andre Brunelli awkwardly started clapping. Cash said she didn’t realize he clapped until she watched it back. She said he should’ve “read the room.”  Trina was sitting next to Andre since he picked her for this moment and she looked emotionless.

Tina and Cash wore matching dashikis for Cash’s last episode. Cash explained that they came from Trina’s grandmother who got them on a trip to Kenya. They previously planned on wearing them but they ended up wearing them for her last moment instead.

At the end of Cash’s last episode, she talked about hoping to see Cinco again. She got what she wished for because the show reunited them with a video chat.

They talked about meeting up soon because of her layover. They did meet and Cash has spent time with Cinco and his father. It looks like they’re giving things another shot after the show as she hoped.

Charlie is still coupled up with Alana. The first day without Cash he revealed to Trina that he missed her, which upset Alana. Only time will tell if they’ll make it to the end.