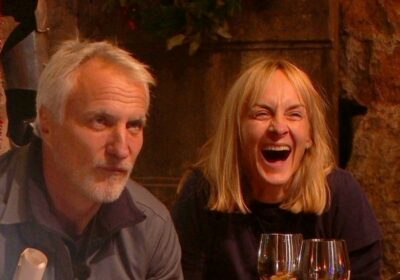 I'm A Celeb star Louise Minchin has admitted that she was left sobbing after her row with David Ginola.

The former BBC Breakfast host found herself breaking down in tears when she fell out with David as he called her "too bossy."

The falling out happened when Louise, 53, was made camp leader and given the task of allocating the chores to her campmates.

David, 54, had been in the role before her and found himself lashing out when he didn't like her leadership style.

The Frenchman claimed he thought she was being "way too bossy," on Friday's episode of the show, leading to them descending into a huge row.

David also accused Louise of taking the Camp leader title "too seriously" as they clashed on what turned out to be her final day in camp.

The popular presenter admits she was already finding things hard and their row pushed her over the edge.

Talking to The Sun she said: "That row was one of the things that upset me on my last day. I’m a people pleaser, and it just kind of came out of the blue.

"I was having a bad day and then that happened and I cried afterwards. Everyone has tough days in camp, and that was a tough day. Other things had already upset me."

Louise then confessed feeling "triggered" by the whole event.

She added: "But that was the trigger that left me in tears. I was often a shoulder to cry on in the camp, but sometimes the shoulder needs a cry too.”

Louise became the fifth celebrity to leave the camp on Thursday after 17 days residing at Gwrych Castle.

She found herself taking over the role of 'mother' to her fellow contestants during her time on the show and told hosts Ant McPartlin and Declan Donnelly the stint had helped her to recognise that she "cared about caring for people."

She added: “I've learnt so much about myself and other people. I've learnt how to get on in tough circumstances."