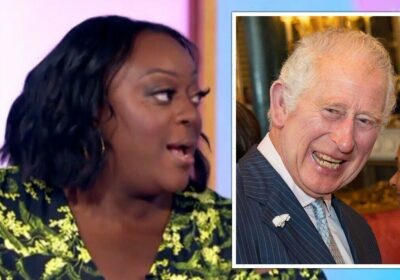 The comedian was invited to Buckingham Palace to attend a reception to celebrate the Commonwealth Diaspora on Thursday. She went into detail about the event to the Loose Women panel on Friday and admitted her mouth was full of snacks when the Prince of Wales started talking to her.

A picture of Judi laughing with Prince Charles was shown on the screen as the comedian discussed the experience of meeting the royal.

Before telling viewers what the future king was like in person, she confessed to making the most of the snacks available at the palace.

She smiled: “The thing is right, there was a snack bar, we had a little snack bar bit.

“We were told to go to table number one because my badge said number one.”

When Judi asked a member of staff what the badge meant, she was informed she would be able to meet Prince Charles and the Duchess of Cornwall.

“Oh my God, I was so excited,” Judi exclaimed. “I was just snacking and eating the Doritos which were there on the table.”

Her co-stars were puzzled about the crisps being provided as snacks at Buckingham Palace.

“There was a bowl near me and the bowl was empty by the time I was standing next to Prince Charles.

“And then there were nuts and all kinds of crisps and I was there eating the Doritos and then I needed a juice.”

Judi then described the embarrassing moment which followed, telling ITV viewers: “As I turned around I hear Prince Charles say, ‘Oh Judi, it’s so lovely to meet you.'”

She burst into laughter and admitted her mouth was full at the time from the snacks she was enjoying.

Judi also had the privilege of meeting Camilla Parker Bowels and told the panel the Duchess was full of personality.

She said: “I took so long talking to Prince Charles himself, I was like, ‘Go on love, I’ll let you go.’

“I moved him along and Camilla came over and I was like, ‘Oh God, I don’t know what I am going to say.’

“I’d never met her or met him before and I am not sure what she is going to be like.”

However, Judi found Camilla charming and revealed she had “bags of personality”.

Earlier on in the interview, Judi said Prince Charles lived up to his charismatic reputation.

“As we walked into the room his shoulders were moving and I nearly called him James Bond,” she quipped.

Loose Women continues on weekdays at 12.30pm on ITV.