Home » TV & Movies » 'Loki': How Old are Agent Mobius and the Other TVA Employees?

'Loki': How Old are Agent Mobius and the Other TVA Employees? 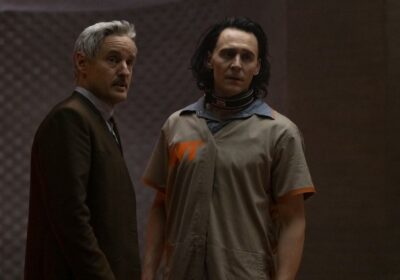 Loki introduced Marvel fans to the Time Variance Authority and its dedicated agents. But considering the organization lives outside of the time realm, how old would TVA employees like Agent Mobius be?

The series premiere of Loki added a deeper layer to the MCU with the introduction of the Time Variance Authority. The show picks up with the 2012 version of Loki (Tom Hiddleston) — a variant created when the Avengers go back in time.

Loki is apprehended by TVA guards and brought back to the facility through a portal. He learns that the TVA is an organization created by the celestial Time Keepers to keep their “Sacred Timeline” intact.

In an informational video, the TVA reveals that a long time ago, a battle of timelines resulted in a  devastating war that nearly destroyed existence. So to bring order to the Multiverse and prevent the end of the world, the TVA keeps tabs on variants and eliminates the ones that could disrupt the sacred timeline.

With its first episode, Loki also introduced a few new faces to the MCU. Loki is first apprehended by Hunter B-15 (Wunmi Mosaku), a TVA guard who seems entirely unphased and unimpressed by his powers.

Then at his trial, he is placed in front of Ravonna Renslayer (Gugu Mbatha-Raw), a TVA judge ready to give him the maximum sentence. But before she can do so, Agent Mobius M. Mobius (Owen Wilson) jumps in and convinces Renslayer to allow Loki to become a TVA recruit.

Loki also briefly meets Casey (Eugene Cordero), a TVA receptionist who keeps Infinity Stones in his desk drawer and uses them as paperweights. When Loki threatens to gut him “like a fish,” Casey wonders what a fish is.

Ultimately, all of Loki’s interactions with the TVA indicate that the organization sits far outside the realm of time and space.

So how old are Agent Mobius and his TVA colleagues?

The TVA employees’ reactions to Loki, the tesseract, and the Infinity Stones prove that they’ve seen it all. And according to director Kate Herron, it’s’ probably because they’ve been around for a lot longer than anyone else.

“So I think [Agent Mobius] must be hundreds, quite a few hundred years old, but maybe not as old,” she told Collider in a recent interview. “So this is the way to explain it because obviously, the TVA is outside of space and time. So I think he must be very hundreds and hundreds of years old because time doesn’t affect him in the same way as it would is as if he was on Earth.”

Herron isn’t sure of the TVA’s exact age. But after seeing how close Mobius and Renslayer are, she guesses the organization might be as old as time.

“But my theory is…this is just me guessing…I think [Mobius is] quite a few hundred years old would be my guess because [he], and Renslayer had this really beautiful deep friendship,” Herron added. “And I think everyone at the TVA is…arguably they’re all from the beginning of time because the timekeepers brought them into existence. So I think it’s sort of almost unknowable for us — to work out how old he possibly could be. So it must be more than hundreds.”