'Little House on the Prairie': Why Laura's 'First Real Kiss' With Almanzo 'Made [Melissa Gilbert] Sick' 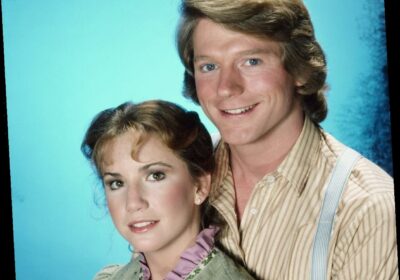 Just because Laura Ingalls was ready for her first kiss on Little House on the Prairie doesn’t mean that the actor playing her, Melissa Gilbert, was. Gilbert recalls her first “real” on-screen kiss with Dean Butler, the man who played Almanzo Wilder.

It’s true that Laura had her first kiss well before the “Sweet 16” episode, but that one was “an innocent little peck,” as Gilbert called it.

“This was Laura’s first real kiss, one she desired, and it made me sick,” wrote Gilbert in her memoir, Prairie Tale.

Gilbert remembers several cast and crew members asking her how she felt about her “big kiss” with Butler.

“I quipped that I would’ve preferred to kiss Scott Baio or Shaun Cassidy,” she wrote. “I knew those teen-idol guys were unattainable and therefore safe to mention, though the truth was, I didn’t want to kiss anyone.”

Gilbert had no idea how to approach Laura’s first kiss, and she “was too scared to talk to anyone about it or ask questions.”

But she was overwrought with anxious questions leading up the scene, like: “How was I supposed to convey passion? Should I kiss him as if I was on The Brady Bunch? Or should I go for something closer to what I saw on Dynasty? How did they do it on the prairie?”

‘Expectations were high’ For Laura and Almanzo’s first kiss

Going into the kissing scene, all Gilbert knew was that it was a big deal — a monumental moment in Laura’s life.

“This was the real beginning of Laura and Almanzo’s romance, which was one of the great romances of all time,” she wrote.

When it came time to film the kiss, Gilbert let Butler lead the way.

“I shut my eyes (inside, they were blank screens) and gently puckered up, letting him find the target,” she wrote.

She was relived when it was over.

“I felt like I took my first real breath in a week,” she wrote.

After the director called “cut,” Gilbert turned to see her mother, who was standing there “with tears in her eyes.”

“She gave me a hug before I hurried off to the craft service table and popped some chips in my mouth to get rid of any cooties,” she wrote.