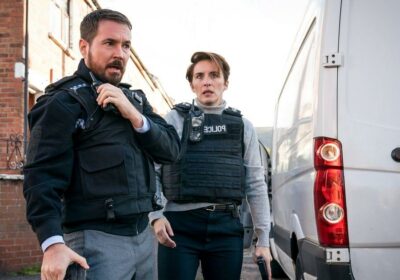 Line of Duty star Martin Compston has teased the possible return of the hit BBC police drama after the huge success of the sixth series.

The Scottish actor, who plays Steve Arnott, has said that he is sure there will be more episodes “if there’s still a story to be told”.

The previous series aired from March to May 2021 and its dramatic finale revealed the identity of the mysterious corrupt officer H.

At the time, fans were left unsure whether the show was going to continue past the pivotal unmasking. But Martin fuelled rumours of a new series when he posted a photo at dinner with co-stars Vicky and Adrian Dunbar, who plays Ted Hastings, and the creator of the show Jed Mercurio.

Fans flooded the comments with wishes for a new season of Line of Duty.

One Instagram user wrote: “COME ON!! WE NEED LOD7!!! #bentcoppers ”

Another said: “mother of God let's hope another series”.

When appearing on Good Morning Britain, he explained the story behind the photo.

“We did say if we ever got 12 million (viewers) we would get tattoos of ‘AC-12 million’,” he explained, “If we ever do another series I think it will be something we all do together then.”

When asked whether there was another series in the works, Vicky said: “Nothing’s planned as yet. We just went out for a nice meal.

“I’m telling the truth. Nothing planned and set in stone.

“Like Martin said before, we always have a long break in between series so it’s not really too abnormal to what we normally do.”

“The fact that people still want to see the show is amazing and if there’s still a story to be told, I’m sure Jed will bring us back.”

Vicky added: “We adore working with each other. Jed’s writing is phenomenal.

“We’ve been working together for over 10 years now and the last series was incredible in terms of the response that we got.

“It was really quite tough to shoot because it was in Covid so it would be lovely to go back and not end that kind of way.”

The last episode of the BBC One drama saw DSU Ian Buckells, played by Nigel Boyle, unveiled as the mysterious corrupt H, the police officer at the top of a network of criminal conspiracy.

Writer Jed has taken on a new direction since the show’s last season aired.

He has written a graphic novel called Sleeper, alongside writer and actor Prasanna Puwanarajah.