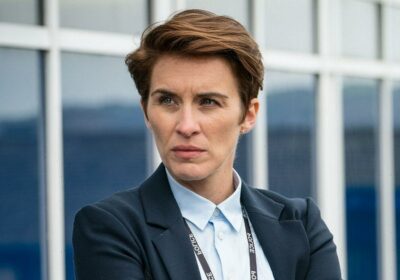 Line of Duty fans reckon the show’s latest cliffhanger has been ruined by a BBC blunder.

Sunday’s episode ended with DI Kate Fleming caught up in a shootout.

Viewers were left fearing the heroine, played by Vicky McClure, 37, had been killed after gunshots were heard just before the credits rolled.

But footage aired by the Beeb in a trailer for the hit drama last month appears to prove she survives.

Kate is seen standing in front of a car alongside fellow cop Joanne Davidson (Kelly Macdonald, 45).

Eagle-eyed fans spotted the apparent gaffe within minutes of the cliffhanger airing and posted the clip on social media.

It means thousands of viewers now reckon they know what happens.

One fan posted: “Screen grab from #Lineofduty session 6 @BBC trailer. #katefleming looks p***ed, #jodavidson has her hands in the air. THIS SCENE HASN’T OCCURRED YET. #katefleming lives for at least 1 more episode.”

And one said: “Major spoiler if you Look back at the original season 6 trailer – both Jo and Kate get stopped by armed police, exact same clothes they were wearing just now.”

Another huge clue that appears to show Kate will survive the shoot-out is a snap of her in an interview room.

She is seen wearing a blue top in a scene that is yet to air.

Show star Adrian Dunbar, 62, yesterday confirmed a major clue gives away what happens next — and that many fans have already worked it out.

In a chat on Good Morning Britain, he said: “A lot of Line of Duty fans know what’s going on. All will be revealed in the fullness of time. There’s a clue out there as to what happens next.”

But some fans are convinced the footage seen in the trailer could be a red herring.

Line of Duty’s many twists and turns have made the show more popular than ever.

Sunday’s episode was watched by a whopping 9.9million viewers, the most in its history.

The series continues on Sunday at 9pm on BBC One.