“Les Misérables” has major stones to debut on the same day and in the same timeslot as the hotly anticipated return of “Game of Thrones,” and that confidence isn’t necessarily foolish or unfounded. With its share of backstabbing, suffering, starry-eyed love, and insurrection, the Victor Hugo novel was delivering large-scale drama long before Jon Snow was even a glint in George R.R. Martin’s eye. PBS’ moving and stunning adaptation of “Les Misérables” is an engrossing treat, featuring a vibrant cast and taking its time to unspool the melodrama and offer loving looks at 19th century France.

Andrew Davies is no stranger to tackling epic tomes such as “War and Peace” and does a credible job wrestling Hugo’s nearly 2,000-page opus to the screen. Fortunately, he has six episodes to work with, which is similar to the author’s five-volume breakdown of the action. Teamed up with director Tom Shankland, Davies spends a good one-third of the episodes establishing the world and its colorful characters. Barring a few tweaks to smooth the logic and flow, this “Les Misérables” hews closely to the source material without skipping too much plot or character motivations — a sacrifice often made in condensing the story into a musical that delivers on emotion but takes shortcuts elsewhere.

Preternaturally strong Jean Valjean (Dominic West), aka Prisoner No. 24601, butts heads with police inspector Javert (David Oyelowo), who sees people and morality in binary terms. Valjean at least can put that tyrant behind him once he’s released from prison, after serving 19 years for stealing a loaf of bread. However, despite reforming and making a good life for himself, it’s not long before Valjean must start to evade Javert again as events in post-Napoleonic France begin to heat up.

West is perhaps recently best known for playing a lousy human being on “The Affair,” but brings a convincing fragility to Valjean, a man who desperately wants to love and do right, but is often conflicted about his ability to do so. In a similar character flip, Oyelowo is best known for playing civil rights leader Martin Luther King, Jr. in “Selma,” but here has no intention of championing the marginalized or challenging authority. He is the authority, and Oyelowo is unbending and bombastic without appearing too villainous. He’s a worthy main antagonist who is crushingly fallible. 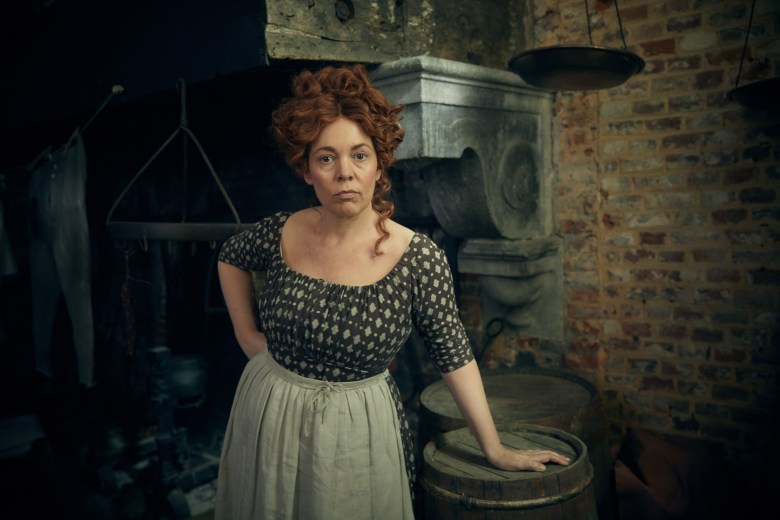 The exquisite casting continues throughout the series: Lily Collins is a charming and ultimately heartbreaking Fantine, Johnny Flynn is her charismatic swain, Ellie Bamber makes for a lively and luminous Cosette, “Durrells of Corfu” star Josh O’Connor is endearing as the romantic Marius, Adeel Akhtar oozes obsequiousness and bile as the duplicitous Thénardier, and David Bradley does what David Bradley does best as a bombastic elder who will brook no contradiction. But oh, it is the supremely likable Oscar winner Olivia Colman who steals every scene she’s in as the loathsome yet hilarious Madame Thénardier. She chews le scenery as if it were a day-old baguette, and it’s every bit as horrifying and enchanting as that sounds. The only complaint, one that viewers learn quickly at her knee, is that one should always ask for more.

Thanks to Oyelowo, who is an executive producer on the series, the cast is as inclusive as it would be if it were performed on Broadway. It’s bold — not because it’s inaccurate — but because this is so rarely seen to this extent in adaptations of classic materials. The diversity adds authenticity to the setting, making Paris feel like a living and breathing city with its varied constituents. It also adds a particular zest to interactions that force viewers to question their preconceived notions: the black man Javert is the one in a position of authority slapping shackles on this white, cowed prisoner. What is right and wrong isn’t ingrained in nature, but it is through the distorted lens of society and pop culture. Javert himself must learn this lesson along with the viewers.

As familiar as many will be with “Les Misérables” as a musical, it’s gratifying and refreshing to return to the story’s non-musical roots. This forces the words, the acting, and the pacing to stand on their own to evoke emotion, without relying on swelling choruses. Barring a few rushed and confused scenes in the later episodes when citywide unrest begins, this new version earns every smile, groan, tear, and gnashing of teeth. And it does so by keeping the narrative clear and allowing character-driven scenes to breathe.

This can be seen particularly in the love stories, both filial and romantic. There is genuine, if fatalistic, joy in Fantine with her first love — from the first giddy glances and courtship to its orchestrated and insightful “surprise.” And even though there’s a bit of Romeo and Juliet shallowness to Cosette’s crush-turned-soulmate, there’s never any doubt about the swoon-worthy magnetism or rightness of her pairing on screen. But it’s Valjean and his ward that stir the most emotions and tightly tethers the story to humanity. Because of this, the middle portions of the series show no sagging. It is no longer burdened by setting up the world and its injustices, and just allows its characters to exist as Parisians of that time. 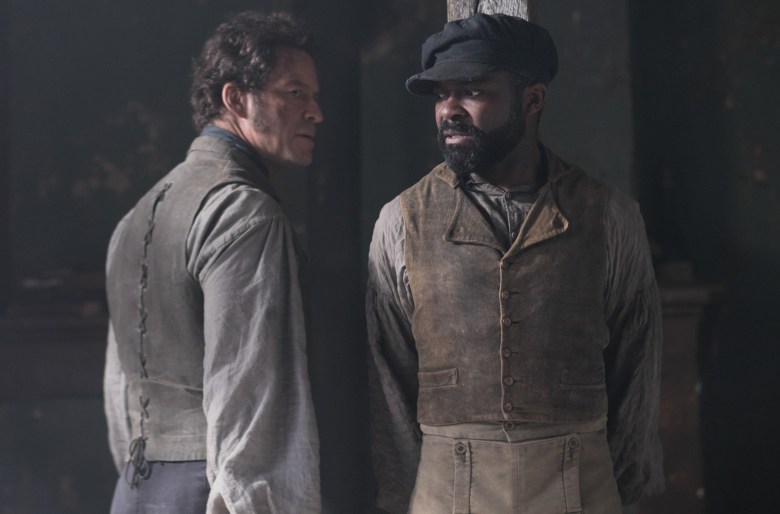 Of course, even for the uninitiated, it’s no surprise that “Les Misérables” has its share of hardship onscreen. The early tragedies and inequities are the worst and hardest to stomach, sometimes crossing over into unintentional farce. There are moments when the cinematography makes certain scenes too clear, and it is devastating. For viewers, there is that expectation of calamity, and it’s best to lean in and revel in the awfulness with the promise of uplifted spirits and blood-stirring scenes to come.

The series builds to its biggest set piece organically, albeit in a one-sided manner. Even a six-hour series can’t manage to include the depth of history and treatises on Paris sewer systems that Hugo was able to impart in his novel. But when all the cannons are fired and last stands are taken, the sacrifices given do not feel insignificant.

“Les Misérables” has been dubbed one of the greatest novels of all time, and while a few outmoded characterizations still exist (Hugo was alas, only a man), it’s still compelling, relevant, and most of all, introspective. This mammoth undertaking would be nothing without Valjean and Javert, whose characters contain multitudes, and the BBC and PBS had the grace to find and reflect that in them.

“Les Misérables” kicks off the first of six parts on Sunday, April 14 at 9 p.m. ET on PBS.