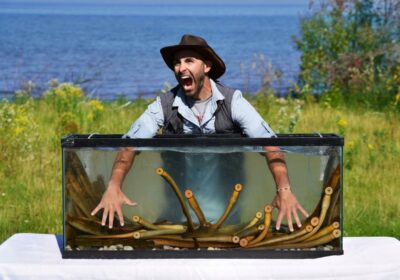 EXCLUSIVE: YouTube is launching a slate of originals designed to promote climate change and sustainability with projects including a Leonardo DiCaprio-produced wildlife adventure series.

The company has ordered three new series – Seat at the Table, Shut It Off ASAP and Stay Wild (w/t) – and is back with more episodes of Joseph Gordon-Levitt’s Create Together, BookTube and Kid Correspondent.

It comes ahead of Earth Day on April 22 and is part of Google’s focus on climate action, which includes the tech company’s plan to use only carbon-free energy by 2030.

Stay Wild (w/t) will explore Earth’s critically endangered environments through a series of immersive adventures with Mark Vins including an expedition through the treacherous, sloping rainforest of Rwanda in an attempt to find the last of the wild mountain gorillas. It is produced by DiCaprio’s Appian Way, Ginny & Georgia producer Madica Productions and YouTube channel Brave Wilderness.

Seat At The Table follows YouTube creator and climate advocate Jack Harries, as he highlights the devastating impacts and innovative solutions to climate change. The 12-part series will see him meet the likes of Sir David Attenborough and confront some of the most powerful people on the planet and demand action from those truly on the frontline of the climate emergency at United Nations Climate Change Conference. It is produced by Colin Butfield, Jonnie Hughes and Helga Berry.

Shut It Off ASAP (w/t) follows YouTube creators AsapSCIENCE – two city boys – leaving their comfort zone and heading to the country. Part The Simple Life and part I Bought a Farm, Mitch and Greg find themselves on a remote farm, trying their hand at going green, regenerative farming, and building a sustainable lifestyle. They’ll be joined by FarmTubers, experts, and other YouTube creators who will help execute their vision of living off the grid and deliver takeaways that can be replicated back at home. It is produced by YouTube Entertainment Studios.

The company is also bringing back Kid Correspondent for three sustainability-themed episodes. The show, from SoulPancake, first aired as a four-part election themed special in 2020 and centers around the next generation of kid journalists dedicated to making the world a better place and helping other kids develop the necessary skills to one day become more informed and involved grown-ups.

These four shows will air in October 2021.

They come as the Google-owned video platform is launching season two of Create Together and BookTube with Bill Gates on Earth Day, April 22.

“Climate change presents a variety of enormous, complicated challenges that urgently need the world’s attention and collective action. In line with Google’s long standing commitment to climate action, YouTube is proud to announce key partnerships and a growing slate of Originals that will provide our massive global audiences access to compelling content with a focus on sustainability,” said Susanne Daniels, Global Head of Original Content for YouTube, “We are committed to producing even more projects that can inform viewers, inspire action, and ultimately improve our chances at making a more sustainable future for our planet.”