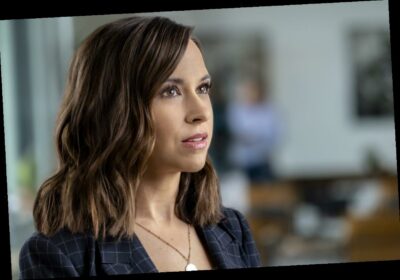 Lacey Chabert has a new puzzle to solve. The Mean Girls actor is starring another installment in the Crossword Mysteries series on Hallmark Movies & Mysteries. This time, her character, Tess Harper, is up against a supercomputer that is implicated in a strange death.

Watching a tale of murder might not seem like the most romantic way to spend Valentine’s Day. But fans of Chabert’s crime-solving crossword puzzle editor likely feel differently. The actor appears in Crossword Mysteries: Terminal Descent, which premieres on Sunday, Feb. 14 at 8 p.m. ET. It’s the fourth movie in the series, which was created by New York Times puzzle editor Will Shortz. Chabert’s character was inspired by Shortz.

In the latest installment in the series, Chabert’s character volunteers for what might be her toughest puzzle-solving challenge yet. This time, her opponent is a new supercomputer known as BB. But things get complicated when the groundbreaking AI is implicated in the death of its creator, the CEO of XCal Technologies (Lochlyn Munro).

Tess gets swept up in the investigation into who — or what — really killed the tech CEO. In doing so, she butts heads (again) with Detective Logan O’Connor (Brennan Elliott). Meanwhile, Chauncey (John Kapelos), who is considering retirement, spends some time with Aunt Candace (Barbara Niven), who helps him evaluate his options.

Another ‘Crossword Mysteries’ with Lacey Chabert is on the horizon

As of now, Hallmark hasn’t made any official announcements about other Crossword Mysteries movies. But in a tweet from September 2020, Chabert’s co-star Elliott indicated that at least one more film was in the works.

“Heading up north to join my partner in crime ⁦@IamLaceyChabert⁩ to solve 2 more puzzling crimes! hoping to bring them to you in [the] new year!” he wrote.

Before Crossword Mysteries, Chabert and Elliott worked together on the Hallmark Channel movie All of My Heart and its two sequels. The two actors portrayed a couple in those films, but they had to shift gears for the mystery series.

“It’s a completely different dynamic,” Chabert told Soap Opera Digest in 2019. “The first Crossword that we did, we had just finished All Of My Heart: The Wedding. We flew to a different city to start doing this one and we really had to catch ourselves because we were in such a different frame of mind playing these characters who were having their wedding and in love to transitioning to playing these characters that don’t know each other and really don’t hit it off at the very beginning.”

But Chabert said she was happy to have the chance to continue to work with Elliott.

“He’s become a dear friend and he’s a great scene partner,” she said. “I love collaborating with him. … It’s nice when you find someone that you work with so well. I feel very lucky to work with someone that I feel makes me better.”