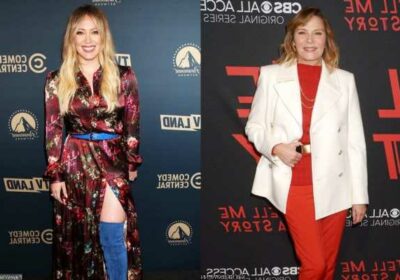 The former star of ‘Sex and the City’ is set to star alongside the ‘A Cinderella Story’ actress as the central character of the series, Sophie, for the upcoming spin-off of CBS’ ‘How I Met Your Mother’.

AceShowbiz -Former “Sex and the City” star Kim Cattrall will play an older version of Hilary Duff in the new spin off from popular sitcom “How I Met Your Mother“.

The British-born actress chose not to return as sophisticated Samantha Jones for the upcoming “Sex and the City” limited series “And Just Like That…“, but now she’s found another reboot for her next job in “How I Met Your Father“.

Duff herself announced via Instagram on Friday, November 5 that she and Cattrall will be starring as Sophie, the central character of the series. “When @kimcattrall said yes I screamed. Now can we please get a better pic than this one I dug up from the deep web [laughing with tears emoji] @himyfonhulu,” the 34-year-old actress captioned an old photo of them together.

Like Cattrall’s former hit series, the new show is all about “finding love in modern-day New York City”, as its star and producer Duff described it earlier this year (2021).

Cattrall will play the pivotal role of future Sophie, who is telling her son the story of how she met his father, much like Josh Radnor and Bob Saget‘s character Ted Mosby did in “How I Met Your Mother”, which aired on CBS in the U.S. from 2005 to 2014.

“How I Met Your Father” bosses have received a straight-to-series order with 10 episodes from Hulu officials, after CBS chiefs passed on the project.

Sophie’s story will transport audiences back to the year 2021 as she and her group of friends, played by Chris Lowell, Francia Raisa, Tom Ainsley, Tien Tran, and Suraj Sharma, try to navigate their love lives in the age of dating apps, according to Deadline.