London-based Huge Designs relished the opportunity to raise their game when creating the 3D animated titles for season two of Syfy and USA’s “Child’s Play” spin-off, “Chucky.” Building on the studio’s work for the acclaimed first season, Huge founder Hugo Moss said that “the ideas have got more developed, and there’s more complexity as we go through the episodes.”

It began with a brief from “Chucky” creator Don Mancini, with designers Paul McDonnell and Ben Hanbury given the job of making it a reality. Each title sequence is around 15 seconds in duration and poses its own challenges and creative opportunities.

“They wanted it to have a bit of a narrative, so it came down to us to think of a unique way to get the feel of the episode across,” said McDonnell. The creative trend was kickstarted by the first episode of the first season, where protagonist Jake Wheeler (Zackary Arthur) creates a model made up of many different doll parts. “From there, it was Ben’s idea to switch it up and change [the titles] for each episode based on whatever is happening in it.”

The pair have worked closely with Mancini throughout the process, describing it as “very much a dialogue.” For the first season, he gave the Huge team scripts, a teaser, and “maybe a very early cut of episodes one and two, “McDonnell recalled. “For season two, Don’s given us quite a lot of what’s ahead, and because he knew what to expect with the titles, he had a better idea of what he wanted to showcase for each episode.”

While developing a title sequence from a script can offer more creative freedom, McDonnell conceded that it can also have its own issues. “You can miss the mark a bit more frequently when you’re reading the scripts because your imagination might be completely different to what the director is imagining,” he said, admitting there is less margin for error when looking at the rushes.

There have also been occasions where the Huge Designs team’s work has influenced the show’s creativity in unexpected ways. “Often after we hand in the visuals, at least for Season 1, the music has changed slightly to reflect what happens visually,” Hanbury said. “We have no input in the music, but it has been quite a pleasant surprise to see afterward how the composers reacted to what we’ve done and mixed it up.”

“For Episode 201, an early idea that Don came at us with was to have Chucky dolls falling past the screen and on fire to reflect the end of Season 1 when the van crashes off the cliff,” Hanbury said. They experimented with several versions of the concept, but it was “hard to capture the spirit of the Chucky doll 700 times, or however many times we needed to populate the logo, so that ended up being changed to the carved pumpkin.”

The second episode’s sequence embraced the “overarching religious theme” of Season 2, primarily driven by Mancini. Comparatively straightforward, it initially started as purely using crosses, “and then there was talk about maybe we started to see Chucky’s reflection.” Hanbury said. “A lot of time with some of these things, you start with one idea, then there is lots of fine-tuning before you get to the final result.” 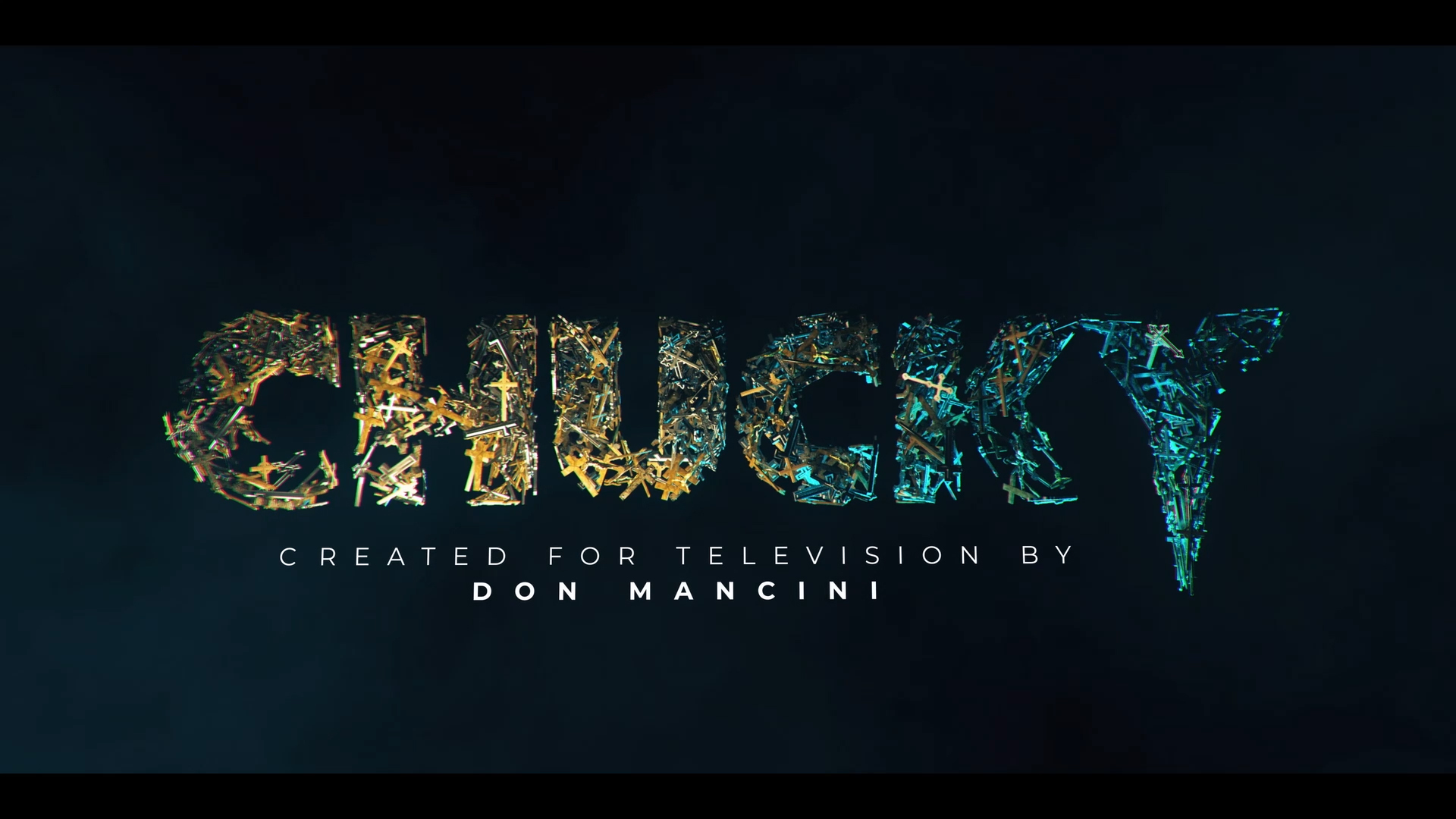 Creating the objects for the titles involves several processes, including scans of physical objects or textures so a computer can replicate them. The crucifix titles for Episode 3 were “purely digital,” but they used physical materials to make them feel “substantial.”

“In Season 1, we asked if we get hold of an actual Chucky doll to help us with our endeavors, which we’re all very excited about,” Hanbury mused. “It has yet to materialize, but we’re still crossing our fingers.”

The card for the second episode, which used framed photos of certain characters, was “a little bit more fiddly” and, according to McDonnell, involved quite a bit of back and forth. “There are quite a few repeating images of Nica and Chucky, so Don would screen capture a freeze frame and say there were a few too many of a photo here or there and ask if we can amend that.” 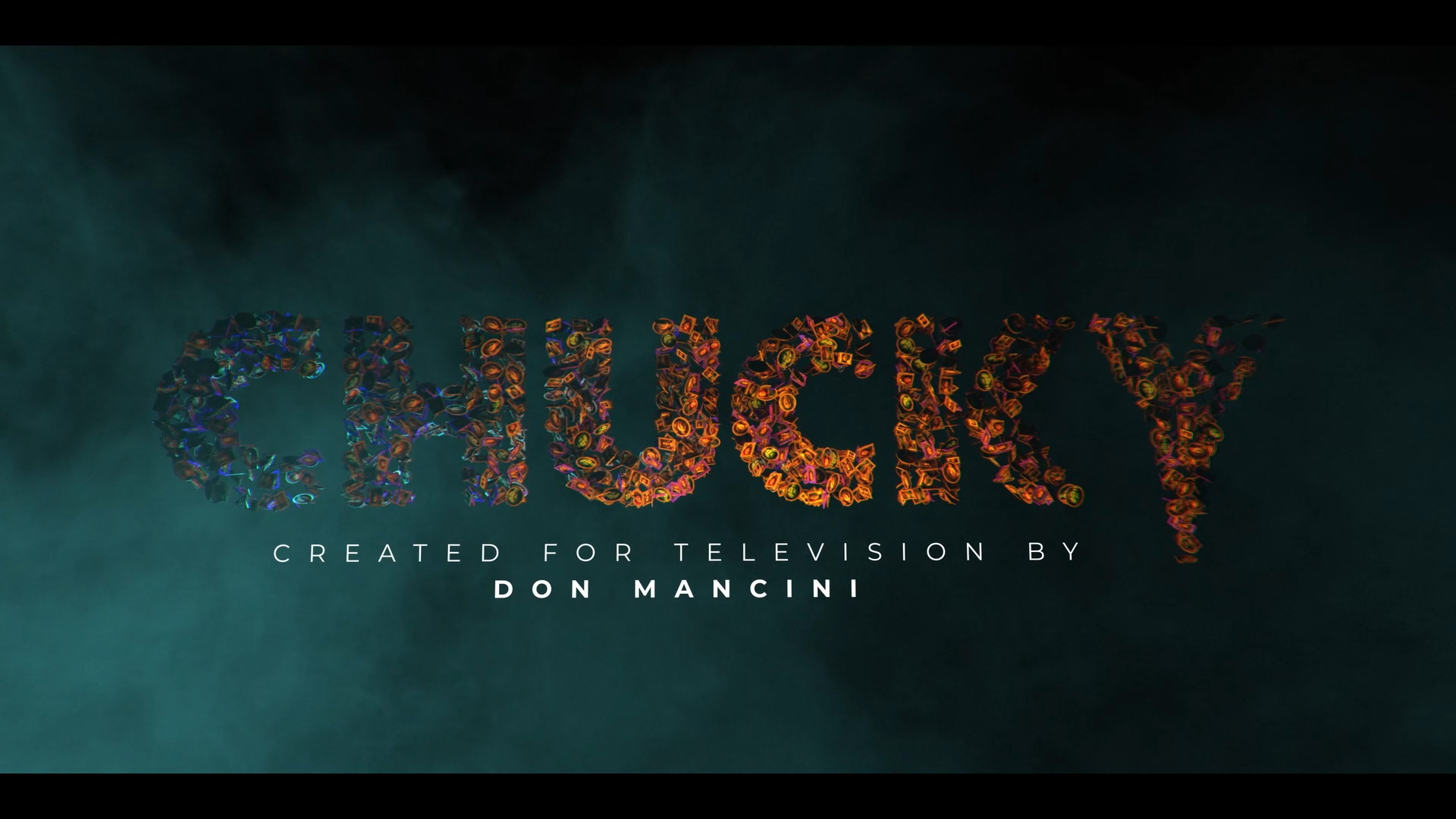 With several more title cards to come this season, Hanbury revealed the team has some great ideas for the second half of the run, including “some of the best ones yet,” but the clock is ticking.

“We’ve been pretty close to the wire a couple of times,” McDonnell concluded. “We were joking, saying that we might have to give them a link so we can Zoom the title sequence as the episode’s airing. It has been pretty close. I think there have been a couple of episodes where we’ve delivered, like, maybe a week before it airs, which is generally unheard of, but the production team has been really great at accommodating that.”