Kevin Hart Appeared as This Recurring Character on 'Modern Family' 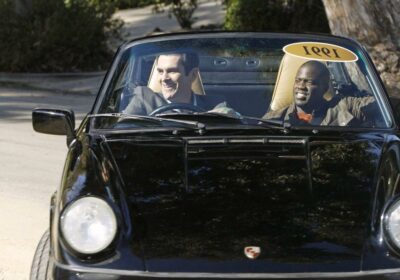 He’s an actor and a comedian. For ABC’s comedy series, Modern Family, this celebrity portrayed an orthopedic surgeon named Andre. He was one of Phil Dunphy’s good friends, even if he gave pretty lousy advice.

Here’s what we know about Kevin Hart’s appearance on this award-winning show.

Kevin Hart appeared in the ‘Treehouse’ episode of ‘Modern Family’

Phil Dunphy is likable and personable, even when Jay doesn’t want him to be. Still, this character noticed that it’s not as easy to make friends as an adult. You can’t just climb up in your treehouse and shout to your neighbors. Or can you?

Although the treehouse started as an exciting adventure for Phil and Luke, the two eventually got frustrated, and Luke left. Phil, who struggled to work alone, threw tools into his neighbor’s yard. That neighbor, played by Kevin Hart, is named Andre. The two become pretty good friends, quickly.

It turned out that Andre is an orthopedic surgeon and a neighbor of the Dunphys for 8 years. Without the treehouse, though, Phil would not have met him. Then, this character became Phil’s good friend, even helping him buy a car in a later episode.

Kevin Hart returned for the ‘Planes, Trains and Cars’ episode of ‘Modern Family’

Hart’s character returned for the “Planes, Trains and Cars” episode of ABC’s comedy series. There, he accompanied Phil on a trip to a car dealership. It was Andre who encouraged Phil to buy a sports car instead of the car that Claire wanted.

Phil Dunphy eventually bought the sportscar and brought it home. Claire wasn’t exactly thrilled, even though she stopped to tell Andre it was a beautiful car. Phil Dunphy, clearly seeing how upset his wife was, offered to give Andre a ride home.

The “Planes, Trains and Cars” episode is the final appearance of Hart’s character. However, this comedian wasn’t the only actor who appeared in the comedy series.

Modern Family had cameos from Millie Bobby Brown, Lin-Manuel Miranda, Peyton Manning, and others. Some celebrities even appeared as themselves. That includes the Star Wars legend Billy Dee Williams and the basketball player Kobe Bryant.

Hart later appeared in movies like Jumanji: The Next Level, The Wedding Ringer, and Night School. He also enjoyed roles in movies like Scary Movie 3, Death at a Funeral, and The Secret Life of Pets.

ABC’s award-winning comedy series, Modern Family, is available for streaming on Hulu. That includes the “Planes, Trains and Cars” episode.