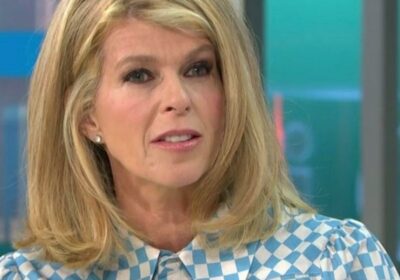 Kate Garraway has revealed her home has been hit by floods, with her husband Derek Draper's dad having to step in to help.

The 54 year old detailed the "nightmare" on Friday's Good Morning Britain as she sat alongside Charlotte Hawkins to discuss the extreme weather that has hit the UK.

As weatherman Alex Beresford wrapped up his forecast for the weekend, Kate said: "My weather week has been…I have lived the weather of the week, Alex.

"Severe flooding in the storms on Monday night so woke up on Tuesday morning to find…we live on a hill – so you come in the door at one level and you go down the steps to the back garden – everything underneath completely flooded."

The former I'm A Celebrity… Get Me Out Of Here! star went on to announce how her husband's family had helped them clear the havoc caused by the floods.

Kate added: "Thanks to Grandad, Derek’s dad, and Auntie Di, we have managed to clear it all out."

Despite the garden now being cleared, Kate revealed how the clearance had put her son Billy's birthday party in jeopardy.

She continued: "The only problem is that it’s Billy’s birthday tomorrow," with Charlotte chiming: "Oh you've got some good weather which is lovely then."

Kate responded: "Well, that's exactly what I thought. It's absolutely lovely, we've got good weather and it's going to be a paddling pool party.

"The only problem is in the clear out we've thrown away the pool. I'm not joking."

Former Dancing On Ice contestant Alex said: "If you need anything this weekend it is a pool."

Kate then made a "blatant plea" to neighbours and shops saying she would pay "quantities of cash" to replace the pool by Saturday.

Earlier this week, Kate shared photos of Billy as he was left heartbroken by England losing the Euro 2020 final on penalties.

Alongside the image, she wrote: "God it's heartbreaking isn't it – but thank you #englandteam for getting us close enough to feel a united moment of joy – and for giving a whole new generation a chance to believe."

For the latest on Kate Garraway and her family, be sure to sign up to OK!'s daily newsletter.