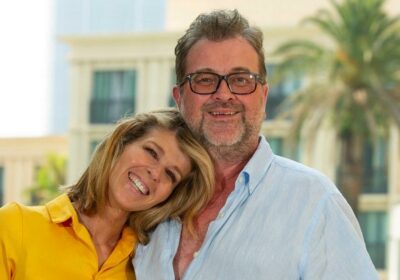 Kate Garraway's braveness has won the hearts of the nation with her story of how her husband Derek and their family has been devastated by Covid.

The father-of-two and author was admitted to hospital in March 2020 and finally returned to his family home 13 months later.

Derek, who turns , who originates from Chorley was transferred to the intensive care unit and had a long battle with the virus.

Throughout Derek's illness, doting wife Kate has provided an exemplary service to her husband as well as continuing to update her fans on his progress.

Although Derek is now covid-free and resides in his family home, he is still left with multiple health issues and needs care 24/7.

Kate provided fans with an insight into the heart-warming love they have for each other in the documentary Kate Garraway: Finding Derek which scooped Best Authored Documentary at the National Television Awards – just hours before the couple were to celebrate their 16th wedding anniversary.

The Daily Star has taken a look back at the loved-up couple's relationship and how they met.

How did Kate Garraway and Derek Draper first meet?

In 2004, Kate and Derek were introduced to each other by mutual friend, former GMTV political editor Gloria De Piero.

Gloria had someone special that she wanted Kate to meet and asked her whether she had any single friends.

But Kate, 54, has gone on to admit that it wasn't exactly love at first sight and she never had feelings towards her future hubby initially.

Kate, who was previously married to first husband Ian Rumsey from 1998 to 2002, was sitting with a group of friends at Claridge's when Derek – thinking they were meeting alone – walked in to meet her.

Speaking openly to The Times about how they first met, GMB's Kate explained: "Derek arrived thinking it was a date and that I was being incredibly cool by ignoring him."

She continued: "He asked me out, but the day of our date called to say he had a clash.

"He’d promised to serve wine at an amateur watercolour painting exhibition at his church. I really thought it was a wind-up. But I turned up and he was indeed serving wine to the congregation in a salmon-pink jumper."

Derek, who was a former lobbyist and political advisor, thought he made a mess of his first meeting with Kate but things certainly turned around during their first date.

And although Kate initially had her reservations, Derek was able to win her over with his charm and the pair soon became inseparable

Early on in their relationship, Kate suffered with a kidney cyst. But Derek proved he was a keeper as he helped care for her while she was in and out of hospital.

Kate and Derek's relationship took off fairly swiftly and the pair tied the knot a year after they met in 2005.

The couple's wedding took place in a low key ceremony in front of close friends and family. Kate wore a gorgeous Caroline Castigliano gown on the day.

Kate spoke to The Times in 2020 regarding her wedding and Strictly Come Dancing star Brendan.

Speaking about the strange coincidence of having Brendan at her big day, she said: "Hilariously, Brendan Cole was at the wedding, years before I did Strictly Come Dancing.

"I assumed he was someone’s boyfriend, but Derek had secretly been having dancing lessons with him.

"Derek is like that: when he wants to learn something, he studies it until he can do it perfectly."

She and Derek had also been planning to renew their vows before he fell ill with Covid, as he said throughout her stint on I'm A Celebrity that seeing her on the show made him fall in love with her again.

He planned to propose to her again after she left the jungle but was overcome with emotion at seeing her again, but managed to pop the question moments later.

Kate said in April last year, shortly after Derek was taken to hospital: "We’d planned the wedding for the end of summer, but I don’t suppose we’ll be booking anything now because we don’t really know what we can do.

"The wedding is something wonderful to look forward to when this is all over. That’s what we’re trying to do – think of all the good things."

Speaking to Daily Mirror about children in 2006, mother of two Kate admitted: "I always wanted children but I wasn't panicking."

Darcey and William sometimes appear on Kate's Instagram feed, where she has well over 980,000 followers, not only this but the children have previously appeared in OK! Magazine alongside the broadcaster.

Due to the fact that Derek was in hospital throughout the majority of last year, Kate admitted in her ITV documentary, Kate Garraway: Finding Derek that she found it difficult to deal with home schooling her children.

During the documentary Darcy spoke candidly about her father's condition and said she was fearful of losing him.

The 15-year-old explained: "I've not really thought the worse, I’ve always said he's going to get better, he’s going to get back – all of this stuff.

"They say that, we've heard rumours, he will get back, hopefully, before the end of next year but we really don't know at all."

Kate took to her Instagram page this morning to post a photo from FaceTiming Derek after having won the award.

She captioned the picture: "Wow. Thank you so so much. Have been in such an emotional daze all night I failed to get a single photo of me or the brilliant @flickerproductions team who made #findingderek @theofficialntas!!

"But maybe this is the photo you most wanted to see anyway – Me FaceTiming Derek (via Darcey’s phone!) to tell him we had won! From him and from the bottom of our family’s hearts THANKYOU.

Kate also made an emotional speech when she collected the award where she had to hold back the tears as she was given a standing ovation.

She said: "I just want to say to all the Darceys, the Billys, the Dereks, the Dereks families out there – whatever you're going through and however you're affected, you're not forgotten.

"We want the joy back, we want it to be over; but if you're still living with the scars, the fight goes on.