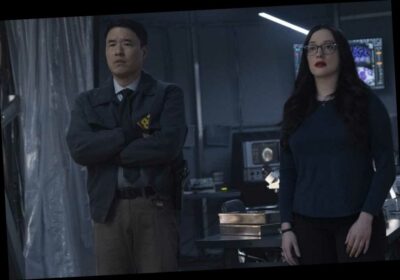 While appearing virtually on The Ellen DeGeneres Show on Monday, the 34-year-old actress opened up about starring in WandaVision and admitted she has to remain mostly mum about her role in the Disney+ series.

First explaining the premise of the hit show and noting that it will answer all fan questions before its conclusion, Dennings then said that Marvel gave her a list of what she "can't say" about WandaVision.

During the interview, host Ellen DeGeneres revealed to Dennings that her DJ, Stephen "tWitch" Boss, is a big fan of the series.

"I love it," he told the actress, who reprises her role of Darcy Lewis from the first two Thor films in WandaVision. "It's taking everything in me not to just ask you 1,000 questions about everything that's going on. I know you can't really say anything, but I love it." "It sounds so gimmicky, but it is actually part of the storytelling," Olsen, 31, previously told PEOPLE of the limited series, which premiered on Disney+ last month. "Why it happens is answered within the show."

The premise of Marvel's new series is the franchise's most unique yet — and that's precisely why Olsen jumped at the chance to reprise her superhero character, whose last cinematic appearance was in 2019's Avengers: Endgame.

"I always played the sincerity of the film, while everyone else got to have all the fun, jokey stuff," Olsen added of Wanda, who was first introduced in 2015's Avengers: Age of Ultron. "But this show gives us the time to know her better and see the levity and love in her."

Earlier this month, Dennings also spoke with Entertainment Weekly about her role on the Disney+ television series, calling it an "amazing" opportunity to step back into the Marvel world.

Detailing that getting the call to return "was very unexpected," Dennings said, "I was delighted to be asked."

"I am just a big fan of Marvel in general," she continued. "I had no expectations of ever coming back, so I was just thrilled."

Dennings also noted that she was "extremely surprised" when she learned that she would be reprising her previous role, "only because Darcy had had no interaction as a character with anyone in the world WandaVision at all, so I was like, 'Wow, that was the last show I excepted to be a part of.' "

"But when I saw what they did with it, it's kind of an ingenious move for them," she added.