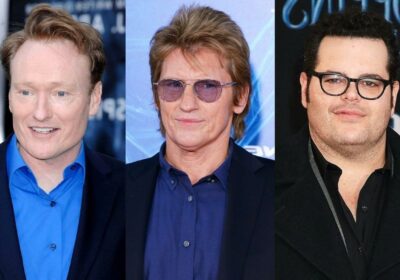 The ‘Frozen’ star and a lot of celebrities have taken to social media to salute the TBS late night show host as his namesake show concluded after 11 seasons.

AceShowbiz –Josh Gad and Denis Leary led tributes to Conan O’Brien on Thursday night (24Jun21) as the late-night TV legend bowed out of his namesake show after 11 seasons.

“CONAN” ended on Thursday and famous friends and fans alike were watching, with many saluting the quirky host, who has been a staple of late-night TV in America for decades.

O’Brien started his new show on U.S. cable channel TBS after Jay Leno unretired as the host of “The Tonight Show”, leaving his replacement – Conan – without a gig.

Honouring the TV favourite after his last show aired, “Frozen” star Gad tweeted, “There are few with guaranteed spots in the Comedy Hall of Fame, but @ConanOBrien is one of those folks who has reigned supreme in every single comedic endeavor he has set out to achieve. As his hosting path comes to an end, I am certain the best is yet to come. Lots of love!”

Leary added, “My fourth cousin @ConanOBrien always makes me laugh. Apparently even louder when he has facial hair. His ‘final’ show is tonight. Then he reinvents himself again on @hbomax.”

Conan is now developing a weekly variety show for streaming service HBO Max as part of a new deal with WarnerMedia.

Actress and comedienne Lauren Lapkus was also among the fans saluting O’Brien on Thursday, revealing on Instagram she loved staying up late to watch “Late Night with Conan O’Brien“, adding, “I always dreamed of getting to be on the show. I put it on my vision board and eventually got to show that to him and even return as a guest a couple more times.”

“So cool to have a dream like that come true. Tons of fun getting to do a sketch with him, @wildhorsesshow, and @eggyboom for Comic Con and eventually having him as a guest on Wild Horses live at @largolosangeles. It’s the end of an era…”

There were also tributes from Bob Saget, Kyle MacLachlan, Jeff Ross, Bill Burr, Mindy Kaling and Brit John Cleese, who tweeted, “Congrats to this funny young man @ConanOBrien on 28 years of his late night programs. One of my absolute favourite talk show hosts, looking forward to your next adventure my friend!”