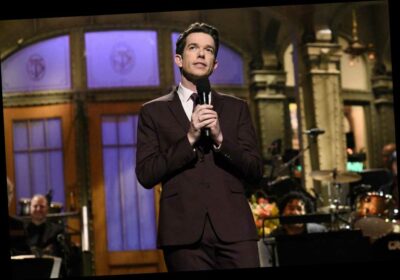 The Associated Press reported Tuesday that it obtained a file on the investigation through a Freedom of Information Act request. The investigation, which was reportedly opened last March and concluded in December, ultimately found that Mulaney was not a threat.

The file, according to the AP, said that Mulaney "made inappropriate statements regarding President Trump" on the Feb. 29, 2020, episode of SNL. While it was noted in the file that "no direct threats were made," the file reportedly said that it was likely "concerned citizens" would report Mulaney because of popular media reports about the monologue.

The section of Mulaney's monologue noted as of interest to the Secret Service included the quote, "Another thing that happened under Julius Caesar, he was such a powerful maniac that all the senators grabbed knives, and they stabbed him to death. That would be an interesting thing if we brought that back now."

The comedian, 38, told Kimmel in December that the joke was not about Donald Trump, but "was about how it was a leap year and leap year had been started by Julius Caesar to correct the calendar and another thing that happened with Caesar was that he was stabbed to death by a bunch of senators 'cause he went crazy. And I said, 'That's an interesting thing that could happen.'"

But it was apparently enough for the Secret Service, who contacted NBC about the joke, the AP reported.

"They investigated me. I guess they opened a file on me because of the joke," Mulaney said back in December. "Am I stoked there's a file opened on me? Absolutely. Did I enjoy it in the moment? Not so much."

"But the person vetting me was very understanding that the joke had nothing to do with Donald Trump," Mulaney added at the time. "It was an elliptical reference to him. I didn't say anything about him … They were very nice in the interview. In terms of risk assessment, no one who's ever looked at me has thought I'd registered above a one."

A Secret Service spokesperson previously told PEOPLE that they do not comment on "protective operations," citing policy.