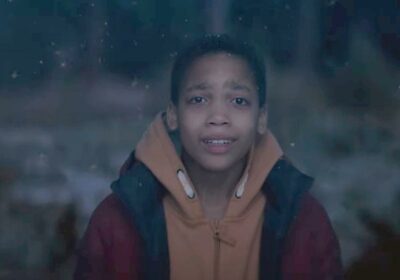 Join the Secret Elves to get first access to our exclusive reviews of the must-have products this year.

The latest John Lewis advert has it all – aliens, Christmas spirit, and mince pies – and it already feels like an official launch to the festive season.

But for some fans, despite the ad oozing with festive cheer, were left concerned for its main character Nathan as he found himself alone in the forest, face-to-face with alien visitor Skye.

It isn't Skye who poses a threat, however, as the pair find themselves becoming fast friends – with Nathan introducing her to mince pies, novelty jumpers and Christmas films.

However, eventually Skye manages to fix her broken spaceship and head back to the stars – leaving Nathan alone in the deep forest after rushing in to meet her.

Concerned fans spotted this worrying detail and immediately flocked to social media to air their thoughts, as one posted: "Good message about welcoming a stranger, being kind, but you still leave a young boy alone in the forest after saying goodbye to his 'friend'.

"No Christmas joy, just a feeling of sadness. Not hitting the tone we need after the last 20 months!"

Others were concerned the ad could inspire kids in real life to go wandering off alone, as one tweeted: "Maybe tag into this 'not to be tried at home' in case we get lots of lost kids wandering and wondering off into forests willy nilly!"

While someone else said: "I wanted to like the John Lewis Christmas advert but my first thought was that we tell our children not to wander off & the young boy got off the bus & went in to the woods alone to follow a light?

"I know it's supposed to be magical but children are impressionable. Nice song."

And a fourth fan fumed: "E.T rip off! Teaching kids to run off into woods, talk to strangers, lie, steal and hide things from parents!"

Other fans were left in tears at the emotional ad, as they saw Skye introduced to Christmas for the first time ever.

And one particular scene had fans "bawling", as Skye attempted to eat a mince pie without first removing the foil wrapper.

One fan penned: "Loved it! Made me laugh when she blasted him with the cold air from the spaceship and ate the mince pie and tin foil. Well done! Love, peace, friendship – why not it’s Christmas after all – goodwill to all."

Someone else agreed: "A very sweet advert, I love the bit where she puts in the mince pie whole with foil wrapper!"

Unexpected Guest will make its TV debut at 8.15pm on Thursday on ITV during the Daily Mirror's Pride of Britain Awards.

It is also available to watch on the retailer's website and social media channels.