Jerry Seinfeld to Star in ‘Unfrosted’, Scarlett Johansson to Front ‘Tower of Terror’ 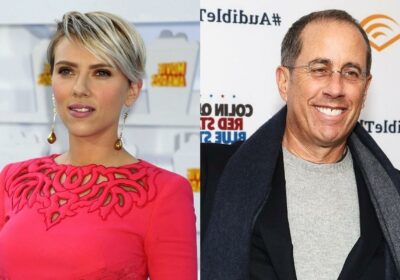 The ‘Seinfeld’ actor is set to direct, produce, and star in a Netflix comedy about Pop-Tart invention and the ‘Black Widow’ actress is tapped for a movie inspired by Disney theme park attraction.

AceShowbiz –Jerry Seinfeld is set to direct, produce and star in the Netflix comedy “Unfrosted“.

The upcoming film chronicles the invention of the Pop-Tart and was inspired by a joke that the 67-year-old comedian once told on stage.

“Stuck at home watching endless sad faces on TV, I thought this would be a good time to make something based on pure silliness,” he explained to Deadline. “So we took my Pop-Tart stand-up bit from my last Netflix special and exploded it into a giant, crazy comedy movie.”

The film’s script has been co-written by Spike Feresten and Barry Marder, and production work is expected to begin in 2022.

The project will actually be the comedian’s first feature since 2007’s “Bee Movie“.

Meanwhile, Scarlett Johansson is to produce and star in upcoming film “Tower of Terror“.

The 36-year-old actress has teamed up with Disney for the movie, and Josh Cooley is said to be penning the script.

According to Collider, Johansson will produce the motion picture via her company These Pictures alongside Jonathan Lia.

A director is yet to be appointed for the project, and plot details for the film are unknown. However, the movie is expected to be based on Disney theme park attraction Tower of Terror.

Scarlett Johansson’s latest movie is “Black Widow“. She is also signed on for animated movie “Sing 2“.