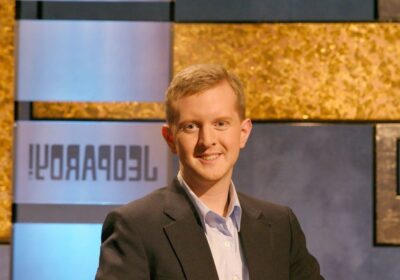 Ken Jennings is returning to the Jeopardy! lectern when Mayim Bialik takes a break from her hosting duties. The game show GOAT originally earned his brainiac status after winning a record-breaking 74 consecutive games in 2004. Since that epic victory streak, Jennings won the Greatest of All Time title in 2020, served as a consulting producer on the show, and filled in as guest host. The trivia champ shared how he prepped for his initial Jeopardy! run before his rise to fame.

Jenning took hitting the books to a new level when he landed a spot on Jeopardy! in 2004. He explained how the iconic quiz show can be completely unpredictable and require a breadth of knowledge.

“Studying up for Jeopardy! isn’t like studying up for a bio quiz in eighth grade,” the Jeopardy! GOAT said, according to his website KenJennings.com. “Jeopardy! can ask you questions on literally any subject from the entire history of all human knowledge, ever. This makes it a little bit hard to cram.”

Noting how some categories consistently appear on the Jeopardy! board such as U.S. presidents, Shakespeare, and geography, Jennings focused on the subjects he expected to come into play. One topic included an area outside his expertise.

Jennings added a few creative steps to his preparation process, which he assumed gave him high ranking in Jeopardy! geekdom.

“I set new nerdiness records by deciding to start watching Jeopardy! (a) twice a day, (b) standing up behind my recliner to imitate the podium experience, and (c) hammering my thumb on my toddler’s Fisher-Price ring-stack toy, which I figured was about the same size as the Jeopardy! buzzer,” he revealed. “I looked and felt like an idiot, but I think it helped.”

The buzzer is often pinned as the reason for defeat amongst former Jeopardy! contestants. Jennings pointed out the importance of thumb dexterity when playing the game.

“If you watch Jeopardy! casually, it’s easy to assume that the player doing most of the answering is the one who knew the most answers, but that’s not necessarily true,” Jennings remarked. “Most of the contestants can answer most of the questions. But Jeopardy! victory most often goes not to the biggest brain; it goes to the smoothest thumb.”

Frequently asked how he retains so much knowledge, Jennings chalked up his impressive trivia acumen to competing in former quiz contests and reading.

“I like to read,” he commented. “As I mentioned, I studied up on some of the most frequently-recurring Jeopardy! categories, so I’d be ready for the show. I played quiz bowl in college, which is good practice for pulling random things you haven’t thought about since high school from deep in the recesses of your brain at a moment’s notice.”

The Jeopardy! star attributed his victories to simply being curious about a wide range of topics and continually absorbing new information.

“Mostly, it comes down to curiosity,” Jennings said. “I think I’m a pretty inquisitive person about the world around me, so as a result I find myself learning new stuff no matter what I’m doing: watching an old movie on TV or doing a crossword puzzle or reading the back of a cereal box. There’s information all around us, if we’d only pay attention to it. It’s a state of mind more than anything else.”