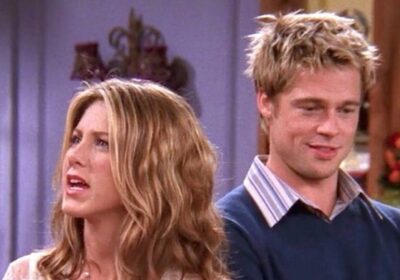 And the 52-year-old Friends star, who is back for an epic reunion with the rest of the cast, only had great things to say about her former hubby.

Jennifer and her fellow Friends co-stars Courteney Cox and Lisa Kudrow were discussing some of the famous faces who guest-starred on the hit sitcom over the years.

And Jennifer gushed: “Mr Pitt was wonderful. [He was] fantastic!”

Both Courteney and Lisa were in full agreement as Brad got rave reviews for his time on the show. But despite their break-up the pair have stayed on good terms.

Jen’s comments come as the long-awaited Friends reunion will finally air this week – 17 years after the beloved sitcom ended.

Each main star is reportedly being paid between £1.7million and £2.1million for the hour-long reunion special, according to The Hollywood Reporter, with the show set to air in the UK this Thursday (May 27) on Sky One.

Brad famously appeared in Friends in season eight of the smash US show, starring as Ross’s friend Will.

Naturally, as Brad and Jen were one of Hollywood’s biggest couples at the time, fans tuned in from all over the world to see the real-life couple bicker on-screen.

In the show Will has been holding a grudge against Rachel (played by his then-wife Jennifer) since the end of high school.

“I wouldn't know what I know now if I hadn't been married to Brad,” revealed Jennifer in an interview with Vanity Fair, shortly after they parted ways. I still feel so lucky to have experienced it. "I love Brad; I really love him. I will love him for the rest of my life. He's a fantastic man. I don't regret any of it, and I'm not going to beat myself up about it. We spent seven very intense years together; we taught each other a lot – about healing and about fun.

"We helped each other through a lot, and I really value that. It was a beautiful, complicated relationship."