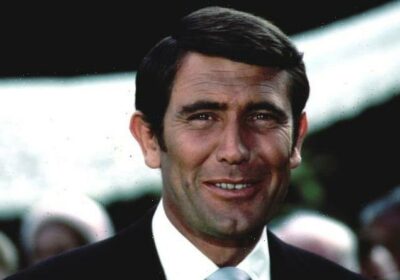 After George Lazenby was cast as James Bond in the 1969 film, On Her Majesty’s Secret Service, his life changed drastically. He fought off hundreds of other applicants and ended up in one of the best-loved 007 movies of all time. The star had a lot of fun on set and was given cash to keep himself entertained between scenes during the months of filming.

Speaking to the Daily Express in 2010, Lazenby said: “I’d been given thousands of dollars of spending money and it was all piling up in my suitcase.”

The star was reportedly being paid £1,000 a day, as well as being gifted plane tickets, motorbikes and an Aston Martin.

He spent his time on set walking around with this suitcase full of cash, allowing him to buy whatever he wanted whenever he wanted.

But it didn’t take long for people to notice him.

After experiencing quite the losing streak, one of the Bond bosses was forced to step in and help Lazenby out.

The Aussie actor continued: “[Harry] Saltzman put a stop to it and told Telly: ‘Leave my boy alone.'”

This wasn’t the only fun Lazenby had on set, however.

During the 2017 documentary, Becoming Bond, Lazenby recalled drinking “a bottle of vodka a day” while on the film set, between scenes, as well as “bedding” a number of the female film crew.

The 30-year-old also had fun getting to know the people working on the film.

Lazenby said: “I also enjoyed speaking to the crew. I’d been a mechanic and a car salesman. I was a working man so I related best to them.”

However, he also found a lot of pleasure in working hard to give a good performance on the film.

He continued: “I did my own stunts and fight scenes, which the other fella [Sean Connery] certainly didn’t do.”

The actor added that he felt his best acting came in the final moments of On Her Majesty’s Secret Service.

The scene in question shows James Bond cradling the head of his new wife, moments after she had been shot.

Lazenby said: “I cried in the first take but [director] Peter Hunt didn’t like that and wouldn’t use it.