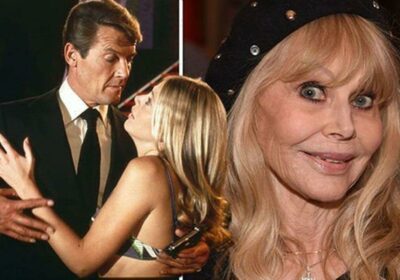 For his second James Bond movie, 1973’s The Man with the Golden Gun, Roger Moore’s assistant Mary Goodnight was played by Swedish blonde Britt Ekland, who had previously appeared in the 1967 spoof Casino Royale with her former husband Peter Sellers. During filming, the late star showed his usual gentlemanly class, especially when it came to a moment of sheer danger that could have lost the model her life.

Upon Sir Roger’s death in 2017, Britt paid tribute to the 007 legend alongside a number of his Bond girls.

The 79-year-old shared: “There were many reasons to adore Roger. He was such fun; he was very tall and very handsome; he was a kind, class act who made filming a joy. But more than that, he literally saved my life. We were shooting the scene where we were escaping from [the villain] Scaramanga’s island with a series of controlled explosions and pyrotechnics. It was a burning hell. We walked through the scene in rehearsal several times and each explosion was timed precisely.”

Britt continued: “I was in a bikini, of course, and wearing wedge heels which made it tough to run. When the cameras started rolling, I was too slow and one explosion went off right under my bottom and singed my bikini. My instinct was to cover my face and roll down to the floor, and if you watch the movie you can see me start to go down. Roger grabbed my hand and pulled me up to safety and carried me along to finish the scene unscathed. Another actor might have told me off or made some sort of comment, but Roger never mentioned it again. He was always ready with a hug and a kind word.”

Britt remembered how they remained good friends for the next four decades and really approved of his fourth wife Kristina Tholstrup, a fellow Swede, saying the marriage “showed what taste he had.”

The Man with the Golden Gun co-stars last met in 2013 in Paris where they drank champagne and laughed a rainy day away at a hotel just off the Champs-Elysees.

She shared: “He told the most wonderful jokes but they were never crude. His friendship is one I shall always cherish. He was ‘my’ Bond but he was the world’s Bond. He will forever be remembered in the movies. And I will carry him in my heart forever.”

Interestingly, one of Sir Roger’s The Spy Who Loved Me Bond girls told Express.co.uk that the 007 lead had a naughty little trick on the set of The Man with the Golden Gun follow up.

DON’T MISS
James Bond: Roger Moore drank for his nerves on For Your Eyes Only set [FOR YOUR EYES ONLY]
James Bond: ‘Foul-mouthed’ Roger Moore and The Spy Who Loved Me set [EXCLUSIVE]
James Bond girl shares Roger Moore’s ‘naughty’ little trick on 007 set [ROGER MOORE]

Caroline Munro told us: “I had the honour of working with Roger, one of the nicest men you could possibly meet. Such a caring gentleman and so funny, very witty. Quick wit. And the crew loved him!”

As for Roger’s humorous little trick, she shared: “He’d come on and say quite risqué naughty one-liners, but very harmless! Very sweet. He’d do it and people would smile and therefore they’d relax. It was very clever.”

Agreeing with Britt, she added: “He was totally Bond. He was really in his stride, he really got James Bond, he was great. Very charismatic and wonderful. He made a perfect Bond, he’ll always be my Bond, always. Nice, lovely man.”