Home » TV & Movies » ITV’s The Thief, His Wife and The Canoe writer responds to fan complaints over accents

ITV’s The Thief, His Wife and The Canoe writer responds to fan complaints over accents 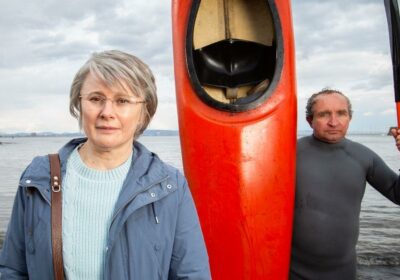 ITV's The Thief, His Wife and The Canoe writer has hit back at fan complaints over the "insulting" accents used on the show.

The four-part TV drama is airing over four consecutive nights to tell the true story of John and Anne Darwin, portrayed by actors Eddie Marsan and Monica Dolan.

John faked his own death after going out to sea in his red canoe to claim life insurance and avoid bankruptcy, the drama focuses on how Anne became complicit in her husband’s deception.

However, despite fans praising Eddie and Monica's portrayal of John and Anne Darwin, some viewers were left confused during Sunday's opening episode as they complained over the "inaccurate" Hartlepool accents.

Taking to Twitter, one person said: "Can't believe @ITV got it so wrong with the accents on #thetheifhiswifeandthecanoe They weren't from b****y Newcastle!"

As a third added: “No one in Haartlepool talks like this… b****y hell. We are not Geordies in Teeside.”

Responding to fans, The Thief, His Wife and The Canoe writer Chris Lang tweeted: "It's lovely people are so passionate about their own accents! John & Anne of course weren't from Seaton Carew, they only moved there in 2002.

"They were both born near Blackhall & over the next five decades lived and worked in (to name a few) Newcastle, Chester Le Street & Durham."

However, despite some fans complaining about the accents, other viewers took to Twitter to praise the new drama. One hailed: “The wonderful @eddiemarsan and @Monica Dolan being superb as per in #thetheifhiswifeandthecanoe – one of my favourite ever real crime stories. Congrats to @ChrisLangWriter for a job well done.”

A second gushed: "Yes, it's fantastic! Perfect casting… and you can somehow only see it happening in England!"

In real life, the deception was to take its toll on Anne who lied to their sons, Mark and Anthony, for five years whilst her husband, in the early days of the fraud, secretly lived in a bedsit next door to the home he shared with Anne.

The couple eventually decided to leave Seaton Carew and move to Panama City to start a new life together before their secret was exposed by the discovery of an infamous photo of them posing in a Panama real estate office in July 2006.

At her trial Anne pleaded not guilty, claiming that she had been coerced into the plot by her husband, but the jury didn’t believe her. She and her husband were both sentenced to more than six years in prison. They were both released in 2011.

In order to get into the roles, Monica and Eddie revealed that they had to stay in the character’s accents all the time on set so they didn’t have to think about it.

Eddie explained: "I don’t know what Monica sounds like when she’s not Anne. We wanted to sound like a married couple, so we only spoke to each other in a Hartlepool accent."

Stay up to date with all the latest on The Thief, His Wife and the Canoe by signing up to OK!'s daily celebrity newsletter .