Home » TV & Movies » ITV’s The Thief, His Wife and the Canoe slammed by fans for ‘inaccurate’ accents

ITV’s The Thief, His Wife and the Canoe slammed by fans for ‘inaccurate’ accents 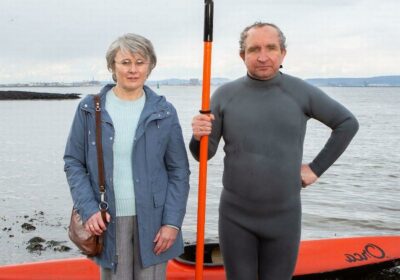 The Thief, His Wife and the Canoe was slammed by fans for 'inaccurate accents' within minutes of the new ITV drama starting.

The four-part TV series is set to air over four nights, and it follows the true story of John Darwin (Eddie Marsan) who faked his own death and was later jailed with his wife Anne (Monica Dolan) for wrongfully claiming John's life insurance.

However, despite the drama being based on a real story from 2002, it seems viewers weren't able to immerse themselves in the show as they weren't convinced by the couple's Hartlepool accents.

Fans flocked to Twitter within minutes of the first episode starting on Sunday night (April 17), with some declaring the accents were "so wrong".

One wrote: "Can't believe @ITV got it so wrong with the accents on #thethiefhiswifeandthecanoe They weren't from b****y Newcastle!" A third commented: "No one in Hartlepool talks like this… b****y hell. WE ARE NOT GEORDIES IN TEESSIDE."

A fourth added: "Should have started with a disclaimer thats says, although these people are from Hartlepool all the actor's will be talking with a Geordie accent because that's how everyone thinks people from the North East speak".

However, other fans were impressed by the show and seemed to enjoy it. One wrote: "The wonderful @eddiemarsan and @MonicaDolan being superb as per in #thethiefhiswifeandthecanoe – one of my favourite ever real crime stories. Congrats to @ChrisLangWriter for a job well done."

A second agreed: "Yes, it's fantastic! Perfect casting..and you can somehow only see it happening in England!"

In the first episode, John faked his own death and disappeared from the grid before asking his wife to call the police and report him as a missing person.

The father was afraid of declaring bankruptcy, and in the drama he said he'd rather die than face the consequences. The real case saw John hide until it was safe to return home, where he stayed next door to Anne while she claimed his life insurance.

Lead actors Dolan and Marsan revealed they stayed in their Hartlepool accents when the cameras weren't rolling.

Marsan said: "I don’t know what Monica sounds like when she’s not Anne."

"We wanted to sound like a married couple, so we only spoke to each other in a Hartlepool accent."

The real couple spent over six years locked up in prison after convincing the world of John's death and escaping to Panama to start a new life.