Piers Morgan, 53, and Susanna Reid, 48, were joined by American Entrepreneur Eric Guster and another guest to discuss the Mueller report, which has claimed President Trump did not commit any criminal practice over his presidential campaign in 2016.

It had been thought President Trump conspired with Russia during his campaign to secure the win for presidency, however, the Mueller report published overnight has concluded Trump did not obscure the vote.

Though the democratic party in America are now calling for the full report to be published, with the guests on Good Morning Britain debating the issue at hand.

However, with the guests talking over one another at certain points and strongly disagreeing with one another, there was a line of miscommunication which made Susanna believe she had been called an “idiot,” by Guster.

How dare you call Susanna Reid an idiot

In the midst of the interview with the American guests, Susanna said to Guster: “You are not a democratic, you’re an independent.”

As Susanna went on to continue her remark, the other guest jumped in to say Guster was a democratic, with Guster agreeing with the presenter’s comment, not the other guests.

Susanna tried to continue her sentiment once again, however, Guster seemed to have just heard the other guests remark about him, telling them: “You’re an idiot.”

However, with all the interruptions, Susanna believed the insult was directed at her and suddenly stopped her flow as she became concerned about Guster’s remark.

Open mouthed, Susanna asked: “I am?” to which Piers jumped in to defend his co-host, telling Guster: “How dare you call Susanna Reid an idiot.”

Realising the crossed wires which has unfolded, Guster quickly corrected the hosts as back in the studio, they burst into hysterics. 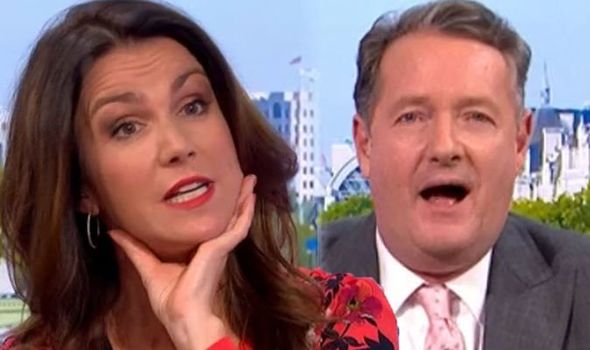 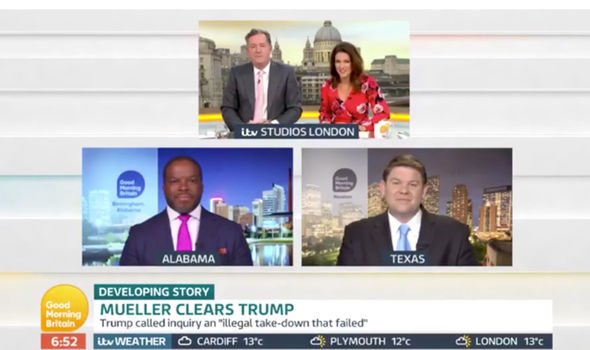 “I was talking about Ben, not Susanna,” Guster remarked, with both American guests and the presenters laughing at the miscommunication, in a brief light-hearted moment in the heated debate.

Coming back to the discussion at hand, Susanna said: “Let’s not make this personal between you both,” as she tried to defuse any backlash to Guster’s sentiment from the other guest.

Referring to Guster’s latter comment, Piers said: “I think that ship has sailed way, way back,” before discussion turned back to the Mueller report.

On Friday’s edition of the early morning news programme, Piers was replaced by Ben Shephard, 44, and he was joined by Kate Garraway, 51, to host the show.

During the show, the pair were joined by former Strictly Come Dancing star Susannah Constantine, 56, as she discussed whether it’s acceptable for married couples to sleep adapt. 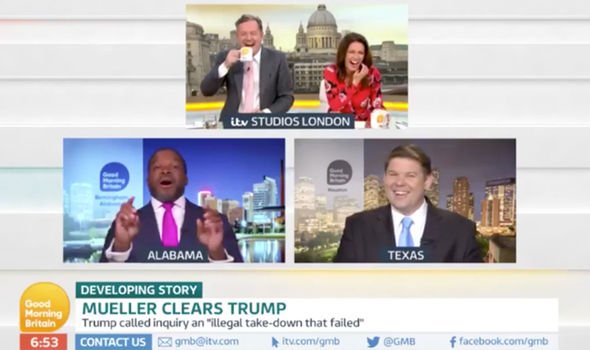 As Susannah debated the issue with the presenters and Michelle Heaton, 39, the former Strictly star seemed to forget her place as she accidentally let slip some post-watershed language.

“When the kids were young we always slept in the same bed. My husband and I thought it was really important to present a united front,” Susannah began.

However, she then said: ““But now they’re older you know, it’s like for f**k’s sake…” with Ben jumping in to apologise.

The presenter told viewers: “Apologies to anyone listening who just heard Susannah expressing herself.”

Susannah apologised herself before continuing the debate, trying to brush the moment under the carpet, but Ben brought up the mishap once more, telling viewers: “Apologies again if anyone heard Susannah’s slip of the tongue.”